Who will be the next offensive coordinator for the New York Giants? We don't know, but here are a few people who might deserve consideration.

Eli Manning turns 33 years old today. For a birthday present, the New York Giants' franchise quarterback found out on Thursday that he will enter the 2014 season with a new offensive coordinator, the retirement of Kevin Gilbride leaving him without Gilbride for the first time in his NFL career.

Will this be a good thing for Manning, who just suffered through the worst season of his 10-year NFL career? Will it be a bad thing? That depends on whether or not the Giants make the right choice at coordinator, finding someone who can maximize what Manning does best and help him regain his Super Bowl MVP form. It also depends on whether or not GM Jerry Reese can surround Manning with better talent in the seasons ahead.

For now, let's focus on the potential coordinators. Here is a look at some of the names that are being bandied about to replace Gilbride.

We asked you if Mike Sullivan was the right choice for offensive coordinator? See what your answer was.

1. Mike Sullivan -- The former Giants' wide receivers and quarterbacks coach has solid relationships with Manning and head coach Tom Coughlin, and learned offense at the feet of Gilbride. That means there is a comfort level all the way around, and that while Sullivan's offense would not likely be a carbon-copy of Gilbride's Manning and the Giants would not be starting from scratch. After two seasons with the Tampa Bay Buccaneers -- one very successful, one not -- Sullivan also has experience calling plays under fire.

Does that make him the right choice for the job? Maybe, maybe not. Pat Traina tweeted Thursday that she was "not so sure that Sullivan is a slam dunk to be the next OC. Team might want to incorporate a fresh perspective." Art Stapleton of The Record tweeted "hearing too early to declare Mike Sullivan fave to succeed Kevin Gilbride as #NYG OC. Candidate, but saying front runner is misleading."

Sullivan may eventually be the choice, but that makes it sound as if the Giants want to take their time, talk to some other candidates and see if someone they think might be better-suited to the task at hand.

Now, let's look at some of the other potential candidates. This is NOT a list of coaches who are definitely candidates or who have been contacted by the Giants. It is purely speculative, with names of some coaches who may deserve consideration.

2. Rob Chudzinski -- Forget what just happened with Chudzinski with the Cleveland Browns, where he was fired after a year as head coach. That is a dysfunctional organization that for years has been unable to get out of its own way. Chudzinski has a reputation as a brilliant, adaptable offensive mind. He has been offensive coordinator in both Cleveland and with the Carolina Panthers, and has been credited with successfuly adapting his scheme to the personnel at hand. He coaxed a Pro Bowl season out of journeyman Derek Anderson in Cleveland, and ran a top 10 offense with Cam Newton in Carolina.

Chudzinski has a reputation as a coach who favors a vertical passing attack -- no matter how he gets to it. That is something Manning and Tom Coughlin would like. The Giants might also like the fact that, at 45, Chudzinski could position himself as a potential Coughlin successor if he were to do well as Giants' offensive coordinator.

3. Hue Jackson -- Jackson has fallen out of favor in some NFL circles, apparently due to concerns that the former Oakladn Raiders head coach is too brash and has too big of an ego. He has a long history of success as an offensive coordinator and position coach, including as a quarterbacks coach.

Here is Jim Trotter of SI.com talking about Jackson:

"... if there's one thing Jackson can do, it's coach. He excelled as an assistant with Washington, Cincinnati, Atlanta and Baltimore, and in his two seasons with the Raiders, the last as head coach, he took an offense that ranked 31st among 32 teams and transformed it into a unit that finished 10th in 2010 and ninth in '11 in total yards. It also ranked second and seventh in rushing yards, dramatic improvements over the 21st- and 28th-place finishes it had in the seasons immediately before and after he joined the Raiders."

Would Coughlin, 68 next season and near the end of his coaching days, be comfortable with Jackson?

"You have to separate the personal from the professional," said another executive. "The professional isn't the problem with Hue -- it's the personal. The person that hires him [as a coordinator or head coach] is going to have to be comfortable with the personal, because this business is all about relationships."

"He was a fantastic OC for the Raiders. They had their two best seasons in the last decade with him as OC and then HC. Darren McFadden actually looked like an NFL running back under Jackson's tutelage and the Bengals saw great production from Giovani Bernard with Jackson as his position coach. He has had trouble finding work because head coaches have been leery about his ego causing problems. But after being a position coach for a couple seasons perhaps he has been humbled. Might be worth a shot. I figured it wouldn't be long before some team came calling for his services."

4. Bill Lazor -- Haven't heard of Lazor? Neither had I until a couple of days ago. Lazor is the quarterbacks coach for the Philadelphia Eagles. He makes this list for a couple of reasons. First, the last time the Giants plucked a position coach away from the Eagles and made him a first-time coordinator (Steve Spagnuolo) that worked out pretty well. Second, Lazor is an accomplished quarterbacks coach, having held that position with the Washington Redskins, Seattle Seahawks and now the Eagles. Lazor also played the position at Cornell. The Daily News refers to Lazor as "a rising star" in the NFL coaching ranks.

5. Gary Kubiak -- The long-time Houston Texans coach is out of work after having been fired before the end of the 2013 season. Kubiak was an NFL quarterback and had an 11-year run as offensive coordinator with the Denver Broncos, also coaching quarterbacks during part of that tenure. He certainly has the pedigree. Does he have interest in stepping back into a coordinator role after eight seasons as a head coach? Perhaps, especially after a health scare during the 2013 season.

Tough to say, Ed. Kubes was fired with a year left on his deal, and he did have that mini-stroke two months ago. While I'm sure he's itching to get back to it, I could very easily see him sitting 2014 out because of one or both of those reasons.

With the way the Texans' offense went in the tank this year, many people criticized Kubiak's offense as outdated. I would note, however, that Houston's offense routinely finished near the top of many offensive categories prior to this year.

Rick Dennison (and Kyle Shanahan before him) were offensive coordinators in name only. Kubiak was the final voice in offensive playcalling.

We previously talked about Duke head coach and Manning mentor David Cutcliffe. It seems unlikely that Cutcliffe would move to the NFL, but it still might be worth asking. There has also been Twitter speculation about Lane Kiffin, the deposed USC coach. Kiffin did work breifly for Coughlin in Jacksonville as offensive quality control coach, but controversy seems to follow Kiffin wherever he goes and Kiffin to the Giants seems far-fetched. 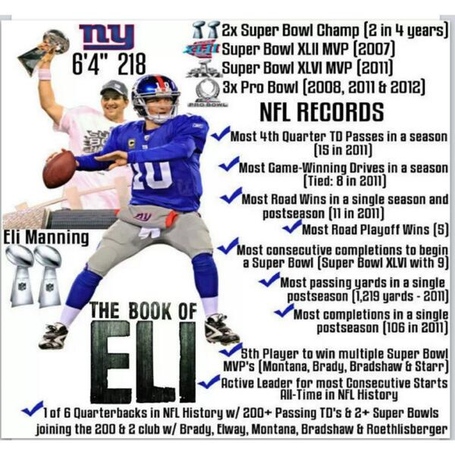