The New York Giants faced both teams who will play in the Super Bowl on Feb. 2 at MetLife Stadium. The Giants weren't competitive against either team.

Share All sharing options for: Giants vs. Super Bowl contenders: New York didn't measure up to Broncos or Seahawks

How far are the New York Giants from being Super Bowl contenders? Well, during the 2013 NFL season the Giants played both of the combatants in the upcoming super Bowl XLVIII. Judging from their results vs. both the AFC Champion Denver Broncos and NFC Champion Seattle Seahawks you would have to say the answer is pretty far.

Both the Broncos and Seahawks visited MetLife Stadium to face the Giants. Let's look at the games the Giants played against this year's Super Bowl teams.

Watching this game is when you had to start getting the feeling that things could get ugly for the Giants in 2013. Manning Bowl III is a game the Giants had a chance to win, but problems that would crop up all season led to their demise. There was an 81-yard Denver punt return for a touchdown by Trindon Holliday, there were four Eli Manning interceptions, the running game was putrid and the Giants' pass rush was non-existent, with no sacks and just two hits on Peyton Manning all afternoon. Here is some of what I wrote in recapping the game:

The Giants actually led, 3-0, in this game and trailed just 10-9 late in the first half when an awful throw by Eli Manning turned into an interception, killing a drive at the Denver 28-yard line. Here is part of what I wrote following the game:

The most discouraging thing about the Giants' 0-2 start, however, is that you can't pin it on the play of the defense, much-maligned a season ago.

The Giants' biggest problem is their offense. Particularly the inability to run the football.

The Giants now have 10 turnovers in two games. Eli Manning threw four interceptions Sunday and leads the NFL with seven. The Giants finished 1-for-11 on third downs. They ran the ball 19 times for an embarrassing 23 yards, with their longest run being a six-yarder by David Wilson. They have now run for a whopping total of 73 yards in two games.

There is no excuse for Manning's horrible first-half throw. The red zone offense is painful to watch. The run-blocking is non-existent. Looking for a positive? Wilson didn't fumble. I guess you could point to Victor Cruz having a nice day as well, with seven catches for 106 yards.

Refrains like this would become commonplace during the remainder of the 0-6 start.

When he wasn't throwing the ball to the wrong team in this game Manning did pass for 362 yards. He would throw for 300 yards only one other time the rest of the season.

The Giants also had bumbles like Brandon Myers falling down inside the Denver 20 with a clear path to the end zone and Rueben Randle fumbling while going into the end zone. We all should have known then that the Manning who would end up playing in the Super Bowl at MetLife was not going to be Eli. 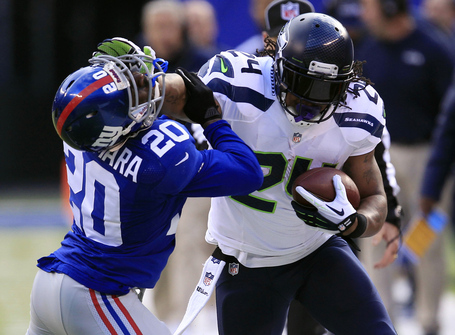 The Giants were no match for the Seahawks [USA Today Sports]

By this point the Giants' 2013 season was over, and they were playing only to try and salvage a bit of pride. The Seahawks came to MetLife with a much bigger idea in mind -- to prove that they were the NFC team worthy of earning a return engagement in the Super Bowl.

The Giants had no chance in this game. Their offense could muster only 181 total yards, including just 25 yards rushing. Manning tossed a ridiculous five interceptions, his career-worst, and had a miserable passer rating of 31.9. The Giants went 1-for-10 on third down.

The Giants' defense played fairly well, holding Seattle to only two touchdowns and a trio of field goals. The broken offense, however, gave the Giants no chance. The Giants' offense crossed midfield into Seattle territory just one time.

In my game recap I wrote that the Giants were "outclassed and embarrassed."

Here was Manning after the game:

"Offensively we didn't have much. We just don't execute well enough and play at the level we need to to win games."

From that same post, here is part of what I wrote:

The amazing ineptitude of the offense is the biggest problem for the New York Giants. If that point hadn't already become obvious during this second straight lost season for the Giants, the point was certainly made in big, bold capital letters during Sunday's 23-0 loss to the Seattle Seahawks.

Eli Manning was amateurish at quarterback. He threw a career-worst five interceptions, not one of them on a ball that was thrown on target.

It is painfully obvious that the Giants need to revamp this offensive line. As bad as Manning was on Sunday, and has been much of the season, the Giants have no chance of running any sort of successful offense because they simply can't block anybody.