Giants' Coaching Rumors: Who could join staff, move up?

If the Giants make changes to their coaching staff, who might be in line to join Tom Coughlin's staff?

Share All sharing options for: Giants' Coaching Rumors: Who could join staff, move up?

While you wait for news of any coaching changes with the New York Giants, something Ralph Vacchiano warns might take into next week to determine, let's play a little 'Coaching Speculation Game.' I will toss out a few names of potential assistant coaches for the Giants, and you tell me what you think.

We have already talked extensively about Mike Sullivan, so we will leave the Giants' former wide receivers and quarterbacks coach out of this discussion. Let's focus instead on some other names. You will notice as I go through this that I will rely extensively on the Tom Coughlin coaching tree, and on coaches quarterback Eli Manning already has familiarity with.

If Perry Fewell gets the head-coaching job with the Washington Redskins, or anywhere else for that matter, how about bringing back Spagnuolo as his replacement?

Spags was wildly successful as defensive coordinator with the Giants in 2007 and 2008, using an aggressive scheme that was popular with players and fans and helped the Giants win the 2007 Super Bowl. Since leaving the Giants after the 2008 season to become head coach of the St. Louis Rams, Spagnuolo's coaching star has been significantly tarnished.

In three seasons as Rams' head coach Spagnuolo went only 10-38 and was fired after a 2-14 season in 2011. Spagnuolo then did a disastrous one-year stint as defensive coordinator of the New Orleans Saints. The Saints allowed the most yards for a season of any defense in NFL history, and Spagnuolo was released while under fire from players who said he "treats people like crap."

Unable to land another defensive coordinator job after the 2012 disaster, Spagnuolo spent the 2013 season as a senior defensive assistant for the Baltimore Ravens. 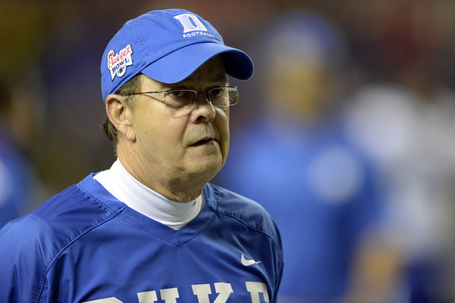 The biggest priority for the Giants has to be doing whatever is necessary to help quarterback Eli Manning return to playing championship-caliber football. With that being the case, don't the Giants have to at least talk to Cutcliffe and see if he would be interested in joining the Giants' staff as either offensive coordinator or quarterbacks coach?

Cutcliffe, currently the Duke head coach, is best known for his work with both Manning quarterbacks. He recruited Eli when he was head coach at Ole Miss, and he was Peyton's quarterbacks coach at Tennessee. The Manning brothers still work out each offseason with Cutcliffe. You can make the argument that no one knows Eli better, and no one has a better opportunity to help Manning re-discover the magic that helped the Giants win two Super Bowl titles.

Would Cutcliffe actually be interested? I have no idea. The 59-year-old has never coached at the NFL level and has a good thing going at Duke, where he has taken the Blue Devils to bowl games in back-to-back seasons for the first time in school history.

I do believe, however, that the Giants have to at least inquire. Manning might not want change, but bringing in Cutcliffe is one move you know he would be happy with.

Future of coaching staff will be among biggest topics of discussion.

A look back at who played well and who did not for the Giants in 2013.

Jauron was out of the league in 2013, having been fired by the perennially dysfunctional Browns after two seasons running their defense.

If Coughlin winds up needing a new defensive coordinator it seems logical that Jauron would be at the top of his list.

Palmer was Giants' quarterbacks coach from 2007-2009 and has to be considered largely responsible for Manning's improvement during that time.

He 'retired' to seek a role with broader responsibility. He ended up as coach and GM of the Hartford Colonials in the United Football League, and was hired by the Tennessee Titans as offensive coordinator for the 2012 season. Palmer was fired midway through the 2012 season in Tennessee.

Perhaps coaching quarterbacks is what he does best. Did Palmer burn any bridges when he left the Giants? I don't know, and I don't know for sure he is interested in coaching again. Since Palmer left, however, Manning has had 25- and 27-interception seasons in four years.

Maybe it's worth reaching out to Palmer and seeing if he wants to reprise his role as quarterbacks coach.

One of the realities of the current Giants' coaching staff is that there are few obvious candidates for promotion. The only one who jumps off the page is special teams assistant Larry Izzo. The 14-year NFL veteran was one of the league's best special teams players, and has been the Giants' assistant special teams coach for three seasons. If the Giants don't soon give him the opportunity to move up, the guess here is that someone will -- and the Giants will end up regretting it.

Other than Izzo, it's tough to make the case for anyone else.

On the offensive side of the ball, quarterbacks coach Sean Ryan and wide receivers coach Kevin Gilbride Jr. are more likely to get booted than be promoted. Offensive line coach Pat Flaherty and tight ends coach Mike Pope are long-time position coaches whoa re great at what they do, but unlikely to move from those roles.