The success of the relationship between quarterback Eli Manning and new offensive coordinator Ben McAdoo will be critical to get the Giants back into championship contention.

Championship Sunday. We have reached the cataclysmic day in the NFL where we find out which teams will represent their conference in the Super Bowl. the San Francisco 49ers and Seattle Seahwaks will mett in the NFC Championship Game. The New England Patriots and Denver Broncos meet in the AFC Championship Game.

The New York Giants? The only thing Sunday means to the Giants is they find out which NFC team will use their Quest Diagnostic Training Center locker room to prepare for Super Bowl XLVIII. The Giants' dreams of becoming the first team to win a Super Bowl in their home stadium ended a looong time ago. Maybe the dream was never realistic to begin with. 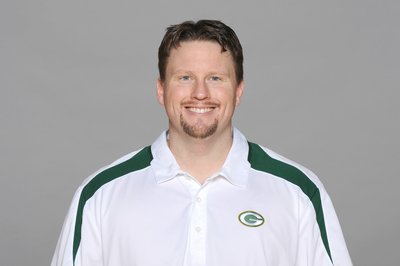 Complete coverage of the changes that have -- and have not -- been made to the Giants' coaching staff since the end of the 2013 season.

As Giants' fans watch Sunday's games they won't be able to help but think about what it will take for the Giants to return to playing at a championship level.

The most important thing, and really the central reason for nearly everything that has already been done since the 2013 season ended, is to restore Eli Manning to his place among championship-level NFL quarterbacks. He has those two Super Bowl MVP trophies, but the truth is it has now been a loooooong time since he has resembled that guy.

Thus, the most important thing for the Giants in 2014 is whether or not they have made the right decision in handing the reigns of their 'broken' offense to first-time coordinator Ben McAdoo, who previously worked as tight ends and then quarterbacks coach in Green Bay.

Packers head coach Mike McCarthy told the New York Post he believes the Giants "hired the right man." McCarthy said he talked to McAdoo before his interview with the Giants.

"We talked at length about Coach Coughlin and what they’ve done there, and I thought that from day one those two would be an excellent fit,’’ McCarthy told The Post on Friday morning in a phone interview from Green Bay. "I think he definitely hired the right man.’’

"It’s not a concern,’’ McCarthy said. "I always felt if you coach the quarterback, you’re also in the daily grind of preparing the quarterback — there’s no better preparation to call plays. Ben’s been sitting there a long time calling plays in his head. He was my eyes in the press box. There’s no better targeting for calling plays on the field than to be the guy in the box that has to regulate the game and watch the game and be two or three plays ahead. He’s done that for us the last two years, so I don’t think that will be an issue at all.’’

If McAdoo is a hit with the Giants, he could be in line to succeed Coughlin, who turns 68 in August.

"I think he’s definitely on that track,’’ McCarthy said of McAdoo’s possible future as an NFL head coach. "He’s a simple man, but he’s a complex individual. He’s not going to get off track, he’s very, very focused on the priorities of his life, both personally and professionally, so I can you promise you this: He’ll pour everything he has into the offense in New York.

"I think you can’t help but respect Ben the more time you spend with him because he really cares about his job," Rodgers said. "He spends a lot of time there…He listens when you talk. He asks good questions. He understands the nature of certain conversations -- which need to stay in the room, which need to be filtered up the chain of command. I just think he’s a guy who wants to learn and really takes to heart the things that I say, the things that he hears from Tom, and really try to become a better quarterback coach every day. And he did."

Rodgers continued: "I think he’s a guy who really understands scheme and preparation and how to install plays. I think he did a great job the last couple years installing the red zone, and you saw him in front of the room every week. Every week he got more comfortable. He put more into his presentation. More of his personality came out. There were jokes. There was an ability to control the room. Obviously the people who are interested in him for a head coaching job haven’t seen that, but to me, that’s an important quality of a head coach -- the ability to control a room with your speech, with humor when necessary, and he proved it every day that he was a very prepared coach."

Manning has thus far said the right things about the new offensive coordinator:

"I've heard a lot of good things about coach McAdoo," Manning said. "I was able to talk to him over the phone last week and we had a great conversation. Obviously he's had a ton of success in Green Bay, and I look forward to working with him and improving our offense."

Many have thus far focused on the idea that Manning, who made a career under Kevin Gilbride out of five- and seven-stop drop vertical passes -- often using play-action and option routes -- will have to learn a new system dependent on shorter drops and quicker throws.

Learning a new system won't be the problem, at least not the way I see it. That's just learning the terminology, memorizing the playbook and executing what McAdoo calls. That's the easy part.

The hard part for Manning is that after 10 years in the league he might be about to embark on a period where he is coached differently, and confronted more directly about his shortcomings and his mistakes, than he has ever been during his NFL career.

To be honest, as I've watched the Giants' quarterback over the years, up-close during training camps, on television and ultimately from a seat in the MetLife Stadium press box, one thing you notice is that no one on the Giants' coaching staff -- not Gilbride, head coach Tom Coughlin and certainly not quarterbacks coach Sean Ryan -- ever seems to question him. Bad throw? Bad decision? Whether it was in a training camp practice, where Manning has a penchant for questionable throws, or in a game I can't recall ever seeing anyone question him in a noticeable fashion.

We've seen Patriots quarterback Tom Brady in screaming matches with coaches on the sideline. I've been told by observers who have seen the Patriots practice that Bill Belichick pulls no punches in what he says to Brady. Long-time Giants' fans will recall that when Bill Parcells was coach he and quarterback Phil Simms often had face-to-face confrontations on the sidelines.

I can't recall hearing or seeing anyone ever do that with Manning. The question that knocks around in my head sometimes is 'who is coaching Eli?'

I'm not saying that McAdoo and whoever becomes the next Giants' quarterbacks coach will be confrontational with Manning, or that they need to be. We don't know what McAdoo's sideline personality will be like.

"I have something to prove. I’m very capable. I’ve never been the pretty girl in the room," McAdoo said in a 2012 interview. "I’ve always had to work for what I have. And I like that."

"He came in from the perspective of ‘Lets’ get back to just doing things the correct way. Let’s make sure our fundamentals are sound. Let’s make sure everything we do technique-wise is sound and let’s make sure we understand the offense completely,' " former Packers quarterback Graham Harrell said recently. "That was his the best sway to add to our run, especially trying to help a guy like Aaron who had so much success and is such a talented player. … I think he took the approach of ‘I’m going to be a stickler about technique and fundamentals and really try to emphasize understanding the offense as a whole, especially from a quarterback’s perspective."

If you watched Manning toward the end of the season you know his confidence was shattered and his fundamentals had broken down.

You have to suspect that McAdoo will coach Manning harder than he has been coached in quite some time. You might also suspect that Manning might not like some of what he hears from his new offensive coordinator. In the end, though, it might be exactly what the Giants' franchise quarterback needs.

Manning is 33 and there is plenty of time for him to win more Super Bowls, or at least get the Giants in position to compete for them. The two old guys playing in today's AFC title game, the 36-year-old Brady and the 37-year-old Peyton Manning, are proof of that.

We don't know how it will all play out. We do know, however, that the Giants' future depends largely on the McAdoo-Manning relationship. It will be fascinating to see what happens.