Former Denver Broncos general manager Ted Sundquist offers his thoughts on what went wrong with Eli Manning in 2013 and whether or not he can get back to playing at a high level.

Fix Eli Manning. No matter who the New York Giants hire as offensive coordinator, that is priority number one. To fix their "broken" offense, they have to fix their broken franchise quarterback.

Manning, of course, just suffered through a miserable season, the worst of his career. He threw a career-worst 27 interceptions, was sacked a career-high 39 times and had a passer rating of 69.4, worst since his rookie year.

To find out what is wrong with Manning I turned to Ted Sundquist, general manager of the Denver Broncos from 2001-2008. Sundquist spent 16 years with the Broncos, serving first as a player personnel assistant and later as director of college scouting.

What does Sundquist see with his scout's eye when he watches Manning play?

"I see a guy who right now lacks confidence not only I think in himself but in the guys that's he's throwing the ball to," Sundquist said. "Something was off, something was disconnecting ... Overall there was this sense and feeling of lack of confidence in what they were trying to accomplish on the offensive side."

Giants' fans who watched the team in 2013 know that to be case. It was co-owner John Mara who referred to the offense as "broken" after watching a season filled with horrible blocking, miscommunications with and lack of production from wide receivers, sub-par tight end play and an inability to run the ball.

Position-by-Position Breakdown of the Giants 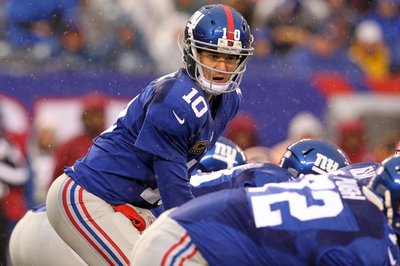 "I'm convinced that all these things are tied together. The wide receiver play, the struggles with the running game this year, Beatty did not play very well, all of those things ultimately have an effect," Sundquist said. "Before it all gets fixed a number of different things need to be addressed."

The first thing that will be fixed, or at least changed, is the offensive coordinator position. Kevin Gilbride retired, quite possibly before Mara and GM Jerry Reese fired him. Mara hinted as much during a recent radio appearance on WFAN when he said "fortunately it didn't come to any type of situation where he had to be forced out."

The new offensive coordinator will have to rebuild Manning's confidence, and his trust in the players he is throwing to. Sundquist said all quarterbacks suffer with their confidence during their careers.

"All of ‘em reach a point every once in a while where they kind of lose their confidence in what's going on, their ability to get the ball down field, trying to force and make things happen on their own, especially when the other end of the passing combination is not coming up with plays," said Sundquist, pointing out that Hakeem Nicks (0 touchdowns) and Victor Cruz (4) did not produce as expected.

"There's a combination not only from a talent standpoint and a skillset, but also the money that's invested in those guys that needs to step up. For whatever reason the confidence level Eli had in making the big plays with those guys didn't appear to be there."

Back to the question, though, of whether or not Manning, a 33-year-old two-time Super Bowl MVP, can be straightened out.

"I think he can get back for a number of reasons," Sundquist said. "First and foremost is pedigree. He's got a brother that he can talk to in the offseason about comebacks and that sort of thing.

"I think Eli is a coachable type player that will respond to ‘quote-unquote' criticism, constructive criticism, regardless of who that comes from. If he can really sit down and have somebody break it down with him and grasp it himself, be able to look in the mirror and say, 'yeah, I'm not doing these things that I used to do.'

"I think he's the type of guy that will get that corrected, and therefore can come back."

Giants' fans can only hope that Sundquist is right.

[NOTE: We will hear more from Sundquist in future posts regarding other Giants-related topics. You can see Sundquist's current work on his personal web site or at The Football Educator.]