We move from the defensive side of the ball to the offensive side today as we continue our position-by-position breakdown of the New York Giants. We will start our look at the offense by focusing on the running back situation.

The running back situation was a mess for the Giants in 2013. Due mostly to injuries the Giants started six different running backs during the season, with Andre Brown ending up as the team's leading rusher with fewer than 500 yards, 492 to be exact. The Giants ended up 29th in the league in rushing, averaging only 83.2 yards per game.

David Wilson --The Giants released Ahmad Bradshaw last offseason to clear the path for the 2012 first-round pick to become the "lead dog" in the backfield, with disastrous results. Wilson fumbled twice in just seven carries during the first game of the season and was replaced by Da'Rel Scott in an eventual loss to the Dallas Cowboys. Neither Wilson nor the Giants' offense ever really recovered. Wilson suffered a season-ending neck injury in Week 5 vs. the Philadelphia Eagles, and his career is now in jeopardy as he will have neck surgery on Thursday. He ended the season with just 146 yards on 44 carries, a 3.3 yards per carry average. Contract Status: Entering third year of four-year, $6.68-million deal. Wilson has $5.38 million guaranteed, and carries a 2014 salary cap hit of $2.12 million.

Da'Rel Scott --The 2011 seventh-round pick got an opportunity due to Wilson's issues and the the injury to Andre Brown at the start of the season. He wasn't really up to the task. Scott had a mistake of his own in that Dallas game, poorly executing a screen pass that went for a game-clinching interception and touchdown for the Cowboys. He carried 20 times for 73 yards (3.7 yards per carry) and caught 11 passes). Scott played in five games during two stints on the roster. Contract Status: Unrestricted Free Agent

Brandon Jacobs -- After Brown went down and Wilson struggled in Week 1 the Giants brought Jacobs back, as much in an effort to try and provide some veteran leadership for the young running backs as anything else. Jacobs did that, and also showed that he could still get the job done when his body would allow. That was not often enough, however, as first hamstring injury and then his troublesome knee let him down. Jacobs finished the season on IR, underwent knee surgery and has announced his retirement. He played in only seven game, gaining 238 yards on 58 carries (4.1 yards per carry). Contract Status: Unrestricted Free Agent (retired)

Andre Brown -- Missed the first half of the season after fracturing his leg for the second time in as many years. He played in eight games and led the Giants in rushing with 492 yards on 139, an average of only 3.5 yards per attempt. He energized the Giants for a while with two 100+ yard rushing games in his first three games, but gained only 68 yards on 40 carries in the final three games. He also fumbled three times. Brown is an unrestricted free agent, and it will be interesting to see if the Giants believe they can build a rushing attack around him. Contract Status: Unrestricted Free Agent

Peyton Hillis -- As the injuries continued to mount in the Giants' backfield, they signed the journeyman Hillis off the street. He did a nice job in seven games, gaining 234 yards on 73 carries (3.4 yards per carry) and catching 13 passes. Hillis is a plodder who won't break big plays, but may have earned himself an opportunity to compete for a roster spot in 2014. Contract Status: Unrestricted Free Agent

Michael Cox -- The seventh-round pick from Massachusetts saw very limited duty as a running back and kickoff returner, with the Giants turning to him basically as a last resort for both. As a running back he carried 22 times for 43 yards (2.0 yards per carry). As a kick returner he averaged only 21.8 yards on 20 returns. Contract Status: Entering second year of four-year, $2.2-million contract. 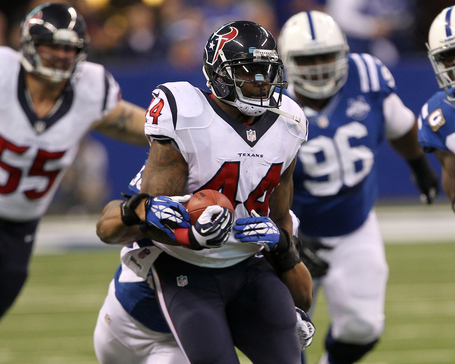 Running back figures to be a high priority for the Giants this offseason. They know they cannot build around Wilson, mainly because his career is in jeopardy but also because his performance has not yet warranted it. Do they believe they can build around Brown? Is it smart to try after he has missed roughly half of each of the past two seasons? There is a long list of name free-agent running backs likely to be available. Ben Tate, Maurice Jones-Drew, Rashad Jennings, Knowshon Moreno and several others could be intriguing.