Share All sharing options for: 2014 NFL Playoff Schedule and Bracket: The Road to MetLife Stadium narrows

We have previews of today's divisional round action for you. The Carolina Panthers and San Francisco 49ers are set for a 1:05 p.m. ET kickoff in the NFC. The San Diego Chargers and Denver Broncos will meet at 4:40 p.m. ET in the AFC divisional round.

SB Nation's comprehensive playoff coverage ives you everything you need to know, and way more.

Here are the SB Nation team sites for each of this weekend's playoff teams:

Lessons For The Giants

What did we learn Saturday that the New York Giants can take to heart as they try to get back to the playoffs in 2014? Here are a couple of thoughts.

1. Run The Football -- Both teams who won Saturday were run-heavy in their play-calling. The Patriots ran 46 times and passed only 25 in overwhelming the mistake-prone Colts. The Seahawks ran 35 times and passed only 18. Two things about that. First, it flies in the face of the idea that the NFL is a passing league. Second, the Giants under Tom Coughlin are legendary for wanting balance -- to a fault. Too often in the past the Giants have shied away from what was working -- run or pass -- to maintain balance. Well, balance is nice, but not necessary. When something works, stick with it.

2. Learn To Make Quicker Adjustments -- Tom Coughlin has beaten Bill Belichick in two Super Bowls, but Belichick showed this season one of the big reasons why his teams always get to the playoffs and Coughlin's don't. Belichick is the best in the business at adjusting to his team's personnel, at staying ahead of the curve in terms of offensive philosophy and at identifying a team's weaknesses and finding ways to attack them. Coughlin is a great coach, but -- like many NFL coaches -- he is more married to a specific approach and to finding the right pieces to fit that approach. That's tremendous when it works, and it has gotten the Giants two Super Bowl titles since 2007, but it looks ugly when the pieces don't fit. In 2013, they didn't fit.

3. 'Chuck and duck' is an NFL staple -- How often did we see quarterbacks fire the ball deep on Saturday, whether they had a receiver open or not? Quite a bit. We same the same last weekend during the wild-card round. The tendency for Eli Manning to throw the ball deep and simply give his receivers an opportunity to make a play drives some fans crazy. Watch games, though, and you see everybody does it. Two good things can happen -- a big-play completion or a big pass interference penalty. One bad thing can happen -- an interception that amounts to a glorified punt. 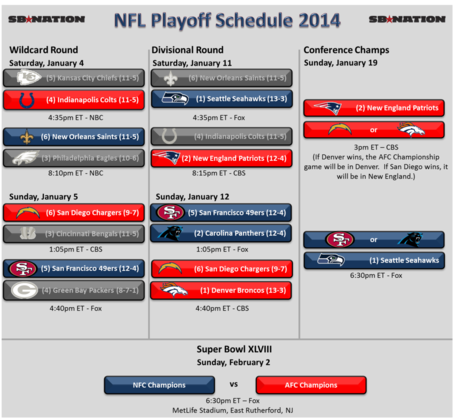