In our position-by-position reviews of the New York Giants we have gone over cornerback, defensive end and defensive tackle. Today, let's turn our attention to linebacker -- another position where there is a mixed bag of success and failure.

The 2013 season was the Year of The Beast for the Giants' linebacking corps. It was the year GM Jerry Reese pulled the trigger on the first in-season trade the organization had made since acquiring eventual Super Bowl VP Ottis Anderson during the 1986 season, acquiring middle linebacker Jon Beason from the Carolina Panthers. Beason quickly took charge, and became the best linebacker the Giants have seen in a long time.

Spencer Paysinger stepped up as more of a leader and full-time participant on defense Keith Rivers had a good season. Jacquian Williams again showed good pass coverage skills. Overall, though, this group is still lacking play-makers, particularly at least one linebacker who can play both the run and pass, as well as be a force off the edge as a blitzer.

Jon Beason -- The mid-season trade that brought Beason to the Giants from the Carolina Panthers was one of the two best personnel moves made by GM Jerry Reese -- with the other being the first-round draft selection of Justin Pugh. Beason brought leadership and a presence the Giants have not had at middle linebacker since the heyday of Antonio Pierce. He remains a solid tackler and a play-making run defender, but the achilles and knee injuries he has suffered have robbed him of some athleticism, which shows up in pass coverage. Beason was -11.2 in pass coverage, worst on the team and 52nd among 56 inside linebackers who played at least 25 percent of their team's snaps. Re-signing Beason should be a priority for the Giants, despite the flaws in pass coverage. Contract Status: Unrestricted Free Agent 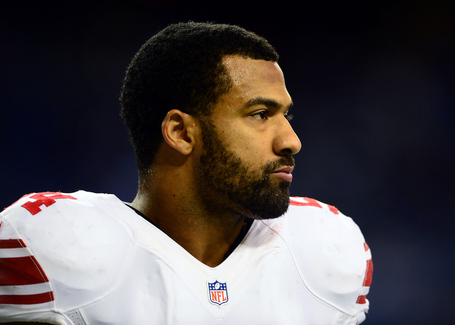 Spencer Paysinger -- Paysinger began the season as a starter and full-time player who was calling the defensive signals. He lost the signal-calling role to Beason, and eventually lost much of his playing time to Williams as the season wore on. Paysinger is a solid, but unspectacular player and it will be interesting to see if the Giants view him as a starting NFL linebacker going forward. Contract Status: Restricted Free Agent

Keith Rivers -- Rivers had a quiet, but pretty effective season. He played 16 games for the first time in his injury-riddled six-year career. Rivers, 27, is a free agent and it will be interesting to see if the Giants attempt to bring him back. Contract Status: Unrestricted Free Agent

Jacquian Williams -- The Giants have hoped for a while that the athletic Williams would become a force as a full-time linebacker. It really hasn't happened yet, and didn't happen in 2013. Williams played 622 snaps and was effective in pass coverage with a +5.3 PFF grade. His run defense, however, was not up to par as he graded at -4.9, second-lowest on the team behind Mathias Kiwanuka's -7.9. Contract Status: Entering final year of four-year, $2.1-million deal.

Mark Herzlich -- For the second straight season Herzlich was unable to win the starting middle linebacker job, one the Giants tried to give him from Day of the 2013 preseason. To his credit, Herzlich did play well on special teams where he accumulated 13 tackles. Contract Status: Restricted Free Agent

Allen Bradford -- Appeared in nine games as a special teams player after being awarded to the Giants on waivers from the Seattle Seahawks. Contract Status: Entering third year of four-year, $2.175-million deal. Bradford has no guaranteed money.

Marcus Dowtin -- Added to the roster for the final couple of games, and got a uniform while Bradford was inacitve. Really not much more than that to say. Contract Status: Unrestricted Free Agent

The Giants have plugged holes at linebacker with veteran free agents, castoffs like Beason and undrafted free agents for more than a decade. Will that pattern change in 2014? There are players like Khalil Mack of Buffalo and C.J. Mosley of Alabama who might tempt the Giants if they are available in the first round of the May draft. With the overwhelming offseason focus on offense, however, this might shape up as another offseason that comes and goes without the acquisition of potential big-time, play-making linebacker.