Could the Giants select one of the two top corners in the 2014 draft? See what they would be getting if they draft Oklahoma State's Justin Gilbert.

In 2013 the New York Giants secondary was one of the team's greatest strengths. They benefited from the emergence of Will Hill as one of the best young safeties in the league. Trumaine McBride transformed from journeyman to dependable starter. Terrell Thomas returned from his third ACL reconstruction and microfracture surgery to put forth a solid season. Antrel Rolle and Prince Amukamara put forth their best performances yet as Giants.

However, regardless of how stout the unit was last season, the 2014 secondary is still in question. With his extensive injury history, Terrell Thomas' future is still in doubt. It's unknown whether or not McBride can continue to play at a high level.

There is also free agency to consider. Thomas, McBride, Aaron Ross, and Corey Webster are all free agents. The only cornerbacks under contract for next season are Prince Amukamara and Jayron Hosley.

The Giants have a strong history of drafting defensive backs in the first three rounds, and given the uncertainty at the critical position, the Giants might elect to select one of the top cornerback prospects come May.

So let's take a look at Oklahoma State's Justin Gilbert. 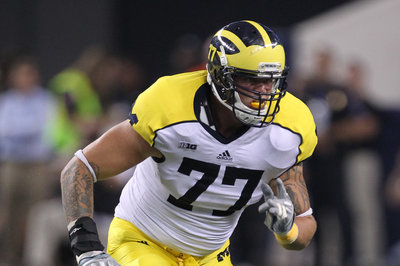 - Dynamic with the ball in his hands

- Plus ball skills (finished the season with 7 interceptions)

- Experienced in press and off man coverage, as well as zone coverages

- Not as physical as you'd like to see in run support

- Awareness can be an issue, both in zone coverage and in run support

A long, athletic, defensive back with a flair for making big plays could be exactly what the Giants need to start across from Prince Amukamara.

Gilbert is better in press coverage than off coverages, and that might cause some issues depending on how Perry Fewell calls the defense next season. Fewell called a much more aggressive defense in the second half of 2013, and Gilbert would fit well with those calls. However, Fewell has regressed from aggressive defense to a more passive one before (2011 playoffs to 2012), so scheme fit has to be at least a bit of a concern.

There's a big disparity in how Gilbert is viewed around the interwebs. Some see his inconsistency and drop him down their boards. Others see his athleticism, playmaking abilities, and upside, and see him as a potential top-10 pick. Personally, I tend toward the latter view. The Giants could absolutely use a player with Gilbert's athleticism and ability to take away a receiver in man coverage.

Also, with both John Mara and Jerry Reese both stating that the Giants need to find a return man to help the Giants' anemic-at-best return game, Gilbert's electric athleticism and dynamic return skills could be what they are looking for.

Gilbert isn't the best cover corner in the 2014 draft. In my view, that honor belongs to Darqueze Dennard of Michigan State. That being said, Gilbert might be the most athletic and most dynamic playmaking corner in the draft. If he is willing to put in the work to iron out the inconsistencies in his game, he could become another Patrick Peterson.