A look at what all the numbers mean for the offensive linemen and tight ends who will work out Saturday during the 2014 NFL Combine.

The 2014 NFL Combine is here, and we finally have something 'real' to talk about!

At the beginning of the week 'Invictus' gave us an excellent introduction to the Scouting Combine. For each day of the scouting combine, I'm going to go a bit deeper and explain what the various drills have to do with each position, which ones to pay attention to, and why you should care.

First thing to be aware of is that we don't get to see the most important parts of the scouting combine. Those are the interviews and medical evaluations.

Granted, there is only so much you can learn about a young man in a 15-minute interview. However, it is an opportunity for the prospects to impress scouts and GMs, like David Wilson or E.J. Manuel did. Or, if a prospect presents a bad attitude or blows the interview off, that can be telling as well.

The medical evaluations are the roots of the Combine. It originally started as an opportunity for various teams to pool their medical information on prospects. Prospects are subjected to nearly any and every test imaginable. Past injuries are examined, and sometimes legitimate medical issues are uncovered, such as when Marcus Cannon's exam revealed that he had cancer, which had been undetected.

Right about now you might be donning a British accent and asking "But what does it all MEAN Basil?". First, my name isn't Basil. Second, let's just get into it. Things will make sense once they're laid out. 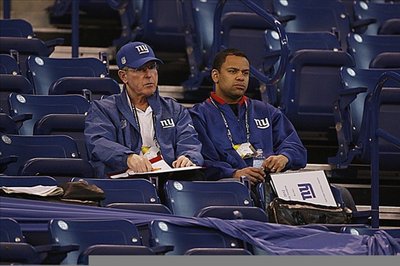 The first two here are obvious. You generally want your FUF's (Fatties Up Front) to be big dudes. Prospects under 300 pounds will likely lack the necessary strength to anchor and push other ginormous human beings around in the NFL. On the other hand, guys can be TOO big. Both in height and weight. Linemen much over 320-330 pounds can have issues with stamina and moving in general.

Height preferences differ on the inside and outside of the OL. Guards and Centers benefit from being not-as-tall (6-foot-2 to 6-4) as tackles because it increases their natural leverage, helps them move more effectively in short areas, and keeps them from clogging passing lanes over the middle.

Tackles, on the other hand, need to be more athletically built as they need to deal with speedy pass rushers and often have to play in space. Being taller helps to distribute their weight better, and generally means that they are longer athletes, better able to get their hands on pass rushers first. On the other hand, I find that tackles much over 6'6" can be awkward, prone to waist bending or lunging at rushers, not to mention that that is a lot of human for a QB to try to throw over or around.

Arm length is a tricky. Generally, longer arms are beneficial, because they allow an offensive lineman to get his hands on an opponent first, which means that he can (generally/hopefully) control him. However, as Justin Pugh showed, they aren't necessary for solid offensive line play, even at tackle.

Hand size is often overlooked, but important. Big, powerful hands are an advantage for linemen because they allow them to better control their blocking assignments.

A strong bench press is nice to see, but the condor-like wingspans scouts look for make bench pressing difficult.

THIS is where the meat is when you're looking at offensive linemen. There are 3 positional drills to pay attention to:

Kickslide Drill: This drill separates the tackles from the guards and centers. A lineman starts out in his stance then stand up and go into back their kick-slide (it is done to both the left and right). The goal is to show a smooth footwork, flexibility in the knee and ankle, and good hand usage as they direct a "rusher" past the "quarterback".

Left tackle prospects are expected to be the best performers in this drill, followed by right tackles, then the interior linemen. This drill will expose a lack of flexibility or rough footwork, and show which tackle prospects will be better suited to play inside at the next level (where movement skills aren't as important).

Mirror Drill: This is another pass protection drill. This one again tries to highlight the prospects' movement skills, agility, and lower body flexibility. It features two offensive linemen facing each other across a makeshift line of scrimmage. The first lineman moves from side to side as quickly and randomly as he can, while the lineman being evaluated does his best to mirror him. You want to see an offensive lineman stay balanced and under control with quick, staccato steps ("Sewing Machine" feet)

This drill is important for all OL prospects, especially considering the growing importance of the passing game, and blocking schemes that involve the player moving in space.

Combo Blocking Drill: This drill has a two linemen working together. The first lineman down blocks while other pulls to block on the second level. This is an opportunity for the offensive lineman to show off his power as well as his ability to block in space. You want to see the linemen maintain his balance, drop his hips and bend at the knee as well as show a strong punch and good hand placement.

How They Tie In

When looking at film, there is always the question about where an offensive line prospect fits in at the next level. Does he fit in a man blocking scheme, a zone blocking scheme, or can he play in either? Likewise, a prospect who was a capable left tackle in college might not fit there in the NFL. A poor kick-slide drill could expose awkward feet that didn't show up against lower levels of competition in college. Likewise, an under-the-radar prospect could surprise with quick, smooth footwork that forces scouts and general managers to go back and take a closer look at their tape.

An in-depth look at the Michigan offensive tackle.

A look at the tight ends who will be on display Saturday at the 2014 NFL Combine.

There are three types of tight ends: Blocking tight ends, receiving or hybrid tight ends, and complete tight ends. The height and weight you want to see in the position depends on what you are looking for out of the position. A blocking tight end will look more like an undersized offensive tackle, while hybrid tight ends are build more on the lines of an industrial-sized wide receiver. "Complete" tight ends have to be big enough to block effectively at the line of scrimmage, but athletic enough to be a capable receiver.

Arm length and hand size are important for all tight ends, either to give every advantage blocking or to have as massive a catch radius and be as sure-handed as possible.

40-Yard Dash: The 40 is most important for receiving tight ends. A fast 40 will show which tight ends can be downfield threats and stretch defenses

Broad and Vertical Jump: These two taken together give an idea as to a prospect's lower body explosiveness. Not only does this help tight ends generate force for blocks at the line of scrimmage, it helps them fight through jams and jump to catch the ball at its highest point.

3-cone and short shuttle: These two drills either highlight or expose a prospects agility and acceleration. The ability to stop, start, change direction, and explode are all important when playing in a short area such as over the middle or in the Red Zone.

The Gauntlet: This is one of the more fun (but unrealistic drills) to watch. The receiver runs a line while multiple quarterbacks throw balls at/to them. This drill exposes which tight ends and receivers can process information quickly, locate the ball on a moment's notice, and most importantly are "Hands Catchers" (ie: will pluck the ball out of the air rather than let it into their chest)

Route Running: These drills show how developed a prospects route tree is, and how well they catch the ball downfield. Also, there is a "Toe Tapping" drill, in which the prospects show whether or not they make the catch going out of bounds (with both feet in, as opposed to 1 as they do in college).

Excelling in these drills means that a tight end will likely be able to be a capable receiving option in the NFL.

Blocking: This is a simple drill that either highlights or exposes a tight end's blocking ability. Tight ends want to show that they have good hand placement, good knee bend, and can explode into the block. This is one that blocking and complete tight ends should excel at, while tight ends who are or were primarily receivers won't show well.

How It Ties In

For a tight end to make money in today's NFL, he wants to show he can be athletic mismatches and receiving threats. Blocking tight ends need to be dominant blockers or have the upside to become complete tight ends with some work. If scouts are looking at a tight end as an athletic mismatch, they're going to want them to check out athletically in the measurable events, and catch the ball well. Prospects who are considered blocking tight ends can raise some eyebrows by being more athletic and / or more natural receivers than expected.

That's it for today. We'll be back tomorrow with the running backs and wide receivers.