Let's take a look at perhaps the best possible fit for this new look Giants offense under Ben McAdoo with wide receiver Marqise Lee out of USC.

With the New York Giants likely losing Hakeem Nicks to free agency, a sizable hole is created at wide receiver. Sure, Rueben Randle, Victor Cruz, and Jerrel Jernigan can pick up the slack. That wouldn't be a bad group at all, but it certainly would not rank as a top 10 unit by any means.

Marqise Lee can help that. Let's look more closely at Lee with today 2014 NFL Draft prospect profile. There are differing opinions on just how good Lee is, mostly because of his size. He stands at 6-foot, 195 pounds. However, as we've seen before, size did not stop Kendall Wright from going top 20 or Tavon Austin from going top 10. His impact this year was limited by injury and he was only able to rack up 57 catches for 791 yards and 4 TDs. 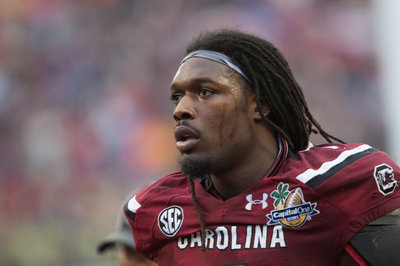 - An insane level of speed.

- Versatile. Can play slot wide receiver, flanker, or even a little bit of running back.

- Large catch radius for his size.

- Impressive acceleration in and out of his cuts for huge YAC.

- Intelligent. Have seen him come back to the ball multiple times and improvise to help the quarterback.

- Can help tremendously on special teams.

- Not the most physical of wide receivers.

- Aggressive run blocker but whiffs quite a bit.

Couldn't be a more perfect receiver to fit in McAdoo's system. I have a sneaking suspicion that if Lee were allowed to grow and develop in Green Bay circa 2011, he would likely be talked about as one of the best wide receivers in the game today. Great route running right out of the box combined with blazing speed and the ability to make people miss is a deadly combination for a west coast attack.

Does that mean he's going to get picked at 12? Likely not. There are much more pressing issues that need to be addressed first and I'd still rank Mike Evans and Sammy Watkins ahead of Lee. He is certainly a rational choice however, and I don't think I'd be upset if he were indeed the first-round selection. You just don't get much better fits than this.

It's easy to see what there is to like about Lee, and also what to dislike from the video. Everybody knows that type of wide receiver. His closest NFL comparison to me is Victor Cruz with more speed and less physicality. His speed in the slot at a decent size is what makes him a first-round pick in my eyes.