Tight end. Other than offensive tackle and linebacker, this is the position most commonly mocked to the ew York Giants in the first round over the last three (or so) years. However, since Jeremy Shockey's falling out with the franchise, the Giants have relied on late-round and undrafted big-bodied tight ends. These have been players like Kevin Boss and Jake Ballard that have been coached up to be adequate blockers and receiving threats by Mike Pope.

It would seem that with the departure of Kevin Gilbride, that is all about to change. New offensive coordinator Ben McAdoo is a former tight ends coach, and promises to simplify the execution of the offense, and it seems likely that he will feature the tight end position as a receiving weapon.

So, in that vein, lets take a look at a new-breed tight end, Jace Amaro. 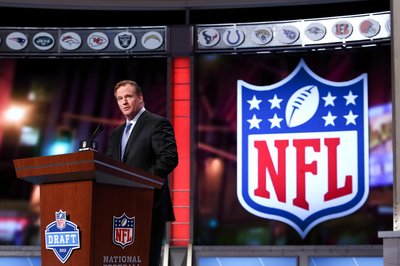 Complete coverage from Big Blue View leading up to the 2014 NFL Draft.

- Hands catcher, snatches the ball out of the air

- Nightmare mismatch for defensive coordinators in the receiving game

- Has the frame to be a capable blocker

- Uses his body well to shield the ball from defenders

- Physical after the catch, looking for yards

- Didn't play 'Tight End' for Texas Tech. Was an industrial-sized slot receiver instead

- Almost no experience as an in-line blocker

- Some may have concerns about his maturity

Amaro is one of the new breed of tight end, in fact, he's essentially a wide receiver in a tight end's body. This is pretty much the opposite of what Giants' fans are used to, where tight ends are essentially small linemen who are allowed to catch the ball if the QB has no better options. But beyond that, tight ends like Amaro present matchup nightmares for defensive coordinators. They are too big for defensive backs to cover, and too athletic for most linebackers to stay with.

For a variety of reasons, the Giants have nothing but questions at the tight end position. At best they already have two of these athletic monster tight ends in Adrian Robinson and Larry Donnell. At worst they have two guys with potential, but who will never pan out.

Then there is the question of "how will the tight ends be used?" McAdoo is a former tight ends coach, so it isn't unreasonable to think that the position could be featured in the new offense. In that case, having three freakishly athletic tight ends could prove to be as vital as having three dangerous wide receivers was in Kevin Gilbride's offense.

The final question here is where Amaro falls in the draft. Current big boards have him somewhere between 20th and 28th. That could change dramatically as the draft process moves forward. It's possible (albeit unlikely) that he could work his way up to being acceptable value to be picked by the Giants at No. 12 overall, but it's also possible that he could fall to the Giants' second-round pick at 44th overall.