Looking back at the Giants' 36-31 loss to the Cowboys in our traditional 'Kudos & Wet Willies' style.

Let's get to the nitty-gritty of Sunday's 36-31 loss by the New York Giants to the Dallas Cowboys with our traditional 'Kudos & Wet Willies' review.

Hakeem Nicks, Victor Cruz and Rueben Randle -- With these three devastatingly good wide receivers how tremendous could the Giants' offense be if they could eliminate the turnovers? Or, get a semblance of a running game? Cruz had 5 catches for 188 yards and 3 TDs. Nicks had 5 catches for 114 yards, including a 57-yarder. Randle had 5 catches for 101 yards.

The Giants' defense -- Entering the season the defense, 31st in the league a season ago, was the major worry. That doesn't look like the case right now. Nothing that happened Sunday night can be blamed on the defense. Dallas had the ball for 37:10. That was the fault of the offense for not being able to stay on the field, not a defense that played admirably. The Cowboys gained only 3.8 yards per rushing play. The defense allowed only 23 of the 36 points Dallas scored, with two of those scores coming directly off turnovers by the offense. The Cowboys averaged 4.5 yards per play to 8.1 for the Giants. 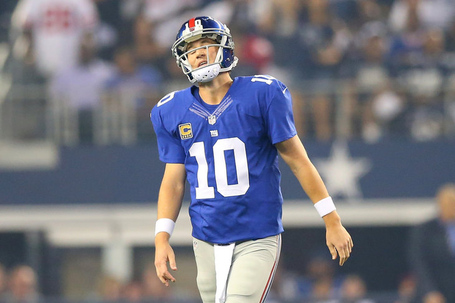 Full coverage of the Giants' 36-31 loss to the Cowboys

Terrell Thomas -- The veteran cornerback didn't just play in his first NFL game since 2010, he played well. The Cowboys tested Thomas, who was the slot cornerback, and he held up well. Thomas made seven tackles, had a pass defensed and appeared to move well.

Justin Pugh -- By my count Pugh appeared to be cleanly beaten only once all night. The Cowboys put DeMarcus Ware on the rookie right tackle's side several times and the first-round pick handled him. Pugh will be just fine.

Justin Tuck -- Yes, there is still gas in Tuck's tank. He had a team-high eight tackles, split a sack with Linval joseph and had two quarterback hits. Tuck is now the sixth Giant to reach 50 career sacks.

David Wilson -- His two inexcusable fumbles got him benched, but those weren't Wilson's only issues Sunday. On the game-opening screen pass he drifted and drifted and drifted, putting DeMarcus Ware fo Dallas right in the past of the Eli Manning pass which he, of course, intercepted. Wilson's pass-blocking was horrific. By my count completely whiffed on two blocks and simply ignored a Dallas pass rusher on a third, leaving Manning to run for his life.

The Giants cut Ahmad Bradshaw, believing that Wilson would be ready for the responsibility of being what GM Jerry Reese likes to call a "lead dog." Right now that, obviously, is not the case. Unfortunately, with Andre Brown on short-term IR, the Giants don't have a real safety net.

Gov. Chris Christie -- For going to Dallas and sitting in the Cowboys' owner's box with Jerry Jones. That's just not right.

Eli Manning -- Manning had 450 yards passing, the second-highest total of his career. The two screen pass interceptions may not have been his fault, but I'm not sure even the film will reveal where the ball was supposed to be going on the third one. Some poor pass-blocking left (umm, David Wilson?) left Manning dodging rushers all night, but he has to lift the offense, not get sucked down into the muck by it.

Da'Rel Scott --Did some good things when he took over for Wilson. He ran five times for 23 yards and caught five passes for 51. The game-changing interception by Brandon Carr, returned 49 yards for a game-sealing touchdown, is on Scott, though. When you know you are the intended target you have to get turned around to see the ball. Scott didn't, flailed helplessly at the ball, it turned into a disaster and the Giants lost the game.

Jason Pierre-Paul and Henry Hynoski -- You have to appreciate the effort of both players, suiting up and playing despite missing the entire preseason following surgeries. Neither player, however, played well. Hynoski played only 13 snaps and whiffed on several blocks, including one that led to Wilson's first fumble, dropped a pass and was penalized for an illegal shift. Pierre-Paul looked slow off the ball and spent most of the night getting stoned by Tyron Smith. He got one sack lined up over Doug Free, but was a non-factor most of the night.

There were a lot of things to like in what the Giants did Sunday night. The receivers look healthy and dangerous. Pugh played well. The defensive line, led by Tuck and good work from Joseph, Shaun Rogers, Mike Patterson and Cullen Jenkins, was eons better than a season ago. The longest play the Giants gave up all night was 23 yards, and for the most part the secondary did a good job.

But, oh, those turnovers. And oh those issues at running back. There were Wilson's two fumbles. There were the two intercepted screen passes. There was Wilson's awful blocking and the obvious rust shown by Hynoski. The Giants need help there, and it would be stunning if they don't sign a veteran by Tuesday.

As often as we have seen the Giants miss the playoffs by one game in recent seasons it is hard not to look at Sunday night's game as a huge missed opportunity. It is a game the Giants clearly could have won without the many self-inflicted wounds they suffered. If they miss the playoffs by a game again this time around they might look back at this one and think they tossed away their season before they even got a chance to get started.