With Monte Kiffin in charge of the Dallas Cowboys' defense, the Cowboys have switched from the 3-4 they ran in recent years to a 4-3. New York Giants' offensive coordinator Kevin Gilbride, in his 24th season coaching in the NFL, has an inkling of what to expect from the 73-year-old Kiffin.

"In the last two years, you had a different regime which was totally committed to confusion, disguise, overload blitzes, and pressures. Now you have a guy that has a little different approach. I think he's got much more mixing, but is more inclined to be coverage," Gilbride said this week. "Not necessarily the two deep for which he's famous for, but he'll mix in single high, but it's a one funnel. Lot of mixture of a one man dog or that type of thing.

"I won't say it's conservative, but it's certainly a much different approach than it's been the last two years and it really resembles what it was a few years earlier with Wade Phillips." 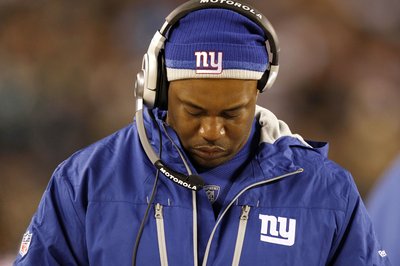 Fewell, Giants determined to be better this season.

Here are a few of the other topics Gilbride addressed during his weekly meeting with reporters.

On whether changes to the offensive line will impact the game plan:

"You don't know. That's the million dollar question. You'd like to say it's not going to influence at all what you're doing, but I don't know how realistic that is. I think you have to take into account the matchups and make some decisions where you have to offer some assistance. Where do you have to slide a certain way? Do you have to put the back to a certain side? Do you have to put a tight end somewhere? Maybe, before where you focus more on letting your guards handle the inside guys and maybe you're looking to help the tackles. Maybe now, that's not the case. Maybe you have to help inside more. We'll have to wait and see."

On Da'Rel Scott, who went from nearly being cut to becoming the No. 2 running back:

"It just shows you how tenuous things can be for all of us, but especially in our business. You know what he did? The three times in a row where we gave him the ball and then that slip screen, I thought he showed as much of a physical presence in his running game that you’d like to see. You know he’s got the speed and you know if there’s a hole there, he’s going to exploit that and he’s got a chance, speed-wise, to go the distance, as he did a couple of years ago on that fake punt. No one’s going to catch him. It’s like David. When there isn’t a hole, can you make people miss, or can you break a tackle and run through. I thought he hit it with tremendous toughness. It was three plays in a row and they just jumped off the field at you. He’s been doing a good job, from the Pittsburgh game on, with catching the ball and blocking on third down. That’s been encouraging, but I think we were just waiting to see that … just show us something special as a running back. I thought he did."

On Hakeem Nicks' physical condition now vs. a season ago:

"I think he's a lot better. I think if there's no setbacks, and I don't think there are, I think he's going to continue to get better. He's finally getting some extended work, which he hasn't' had. I think his leg strength and fitness, his endurance, everything is just going to get better and better. It's encouraging because last year, if he went out one day, he would swell up. You have to admire him and we all did appreciate his toughness, but the reality of it was he was playing far less than full strength."

On Brandon Myers' comfort in the Giants' offense:

"I think it's like anything that's new. I don't think anybody is as good as they are when they've been in the system or done something for a while. He is a person like many that I think would hopefully get better. I think he's working at it. Maybe there are a few more options that we give that were not available to him in the previous offense. He had a couple of different coordinators too and it wasn't really until his last year that all of a sudden he had these numbers. There were four years that there were no numbers. Once he gets it down, I think it will show that he's productive and has the potential of being an effective part of your offense. I think he's still very much in the formative stages, or learning stages. I think we've been encouraged by, A., his attitude, B., when he looks like he's comfortable with something, he does it pretty well."

On David Wilson's improvement as a blocker:

"I think he has really made a determined effort to be an effective blocker. He's never going to be 6-foot-2, 240 pounds. He's not that kind of kid. He has shown a willingness to go after people and be aggressive. He's done a tremendous job with what we call chipping, where he's looking to help and sees a lineman and he's stroked them pretty good before he's releasing to the passing game. Of all of the things he's done, this preseason, he's shown a realization of how important that aspect of the game is for us."

Giants vs. Cowboys 2013, Week 1: Everything you need to know