What now for Giants? Finding out about the future, that's what

It is time for the Giants to turn their attention to the future and stop trying to re-capture past glory.

Share All sharing options for: What now for Giants? Finding out about the future, that's what

Where do the 0-4 New York Giants go from here?

"Keep trying. What do you mean, ‘Where do we go from here?’ " head coach Tom Coughlin said Sunday in the aftermath of a 31-7 loss to the Kansas City Chiefs. "You go back, and take a look at the tape, you look at the next opponent, come together, we try to plan again, we go back to work. What else is there for us to do? Go back to work and see if you can make something happen that allows us to be more competitive, to play a second half of a game, rather than one half. To play four quarters, to put some points on the board and give our defense a chance to regroup rather than send them back out there every three plays. That’s what we can do." 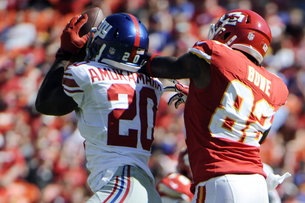 Our traditional look back at Sunday's game.

Giants' players and coaches will continue to talk about how the 2013 season isn't lost yet, about how the mediocrity in the NFC East means they aren't out of contention before October even arrives, about how they still believe they can be a good football team.What choice do they really have? That is what they have to say, whether they truly believe it or not.

The reality is, though, the Giants are not a good football team. They haven't been for a while. They are 3-9 in their last 12 games, with probably six of those losses being blowouts. Unless something dramatic -- and unlikely -- happens, this will be the fourth time in five years that the Giants miss the playoffs. Dave Hutchinson of the Star-Ledger even wondered earlier the 2011 Super Bowl team was an aberration, writing "perhaps Giants general manager Jerry Reese was lured into a false sense of security about how talented it actually was."

'It is time, in many ways, for the Giants to stop hanging on to their past and begin moving toward their future.'

Forget making a playoff run. The next 12 games are evaluation time for the Giants. In many ways, despite the Giants' talk about playing in the Super Bowl at MetLife Stadium next February, this always felt like a transition year for the Giants. Believing that the two Super Bowls were the standard for the veteran core of this team rather than all of the disappointment around those titles the Giants kept as much of the old gang together as they could to try and make one last run.

Quite obviously, and painfully, that simply isn't working.

The Giants have an extraordinary number of players on one-year contracts and have decisions to make on whether or not to retain a number of other high-priced veterans nearing the end of their deals, like Chris Snee, David Baas and Antrel Rolle.

It is time, in many ways, for the Giants to stop hanging on to their past and begin moving toward their future.

Tom Coughlin is going nowhere, unless he chooses to. Eli Manning is not going anywhere, even if he should go back to 'how not to turn the ball over' school. Victor Cruz is a keeper. Prince Amukamara looks like a keeper. There are probably other guys who should be on the 'keeper' list, but for the most part all bets are off after that very short list. And yes, that includes the coaching staff as well as the roster.

So, how do the Giants go about beginning to figure out that future?

They can start by turning over more of the running load to David Wilson. We can all see the flaws -- the inability to block and the fact that he isn't an accomplished receiver at all. Yet, the Giants have to find out if Wilson can be the "lead dog' GM Jerry Reese thought he could be. A 50-50 split in snaps with Da'Rel Scott isn't going to get that done.

They might as well continue to play the young offensive linemen. Justin Pugh needs to stay at right tackle the rest of the season. James Brewer has shown enough at guard that he should continue to play. Snee, Baas, Kevin Boothe and David Diehl are all likely to be ex-Giants next season. Besides which, none of them are playing all that well, anyway. Give Brewer a full shot to show whether or not he can be part of the line going forward. Find some snaps for Brandon Mosley along the way, too.

Hakeem Nicks is a free agent at the end of this season. He hasn't been anywhere near the Nicks of old so far. The Giants have to take a long, hard look over the rest of the season and decide if they even want to try to keep him around. Part of that will be continuing to play Rueben Randle to see if he and Manning can ever mind-meld (a reference for you original Star Trek fans) and get on the same page.

They need to find out if Larry Donnell or Adrien Robinson can play. Brandon Myers is not the answer at tight end. He can't block, and almost all of his catches thus far have come in garbage time.

Defensively, the Giants really have few options -- and, amazingly, fewer problems -- but there are a few things they might be able to do.

First and foremost, Damontre Moore has to get regular snaps on defense the rest of the way -- at least 25 to 30 per game. Mathias Kiwanuka and Justin Tuck are trying like crazy, but neither is what he used to be nor are they likely to be part of the Giants' future. Let's start finding out if Moore can be an impact player.

The same goes for Johnathan Hankins. The second-round pick has not dressed for a game yet. While Cullen Jenkins, Shaun Rogers and Mike Patterson have played well, the best thing for the organization is to get Hankins a suit on Sundays and start to find out if he can play.

Which veteran players deserve to stay? The Giants have to look at these next 12 games with an eye toward figuring that out. The Giants can't simply keep turning to the 2007 and 2011 core and hoping there is one more magical run.

One defensive player the Giants need to scrutinize closely is Pierre-Paul. He was great in 2011 and good last year, though not as good. Now, he is coming back off back surgery and has been ineffective. What will he be? What they see the rest of this season might help shape how they approach the draft and free agency.

'The Giants can't simply keep turning to the 2007 and 2011 core and hoping there is one more magical run.'

The coaching staff also has to be evaluated. Coughlin is a loyal man and he has stuck with his assistant coaches for years now. That's been an understandable position, but it's fair to ask if the Giants have the right assistant coaches to lead this team going forward.

Offensive coordinator Kevin Gilbride is criticized by fans more than any other coach. Everyone who reads Big Blue View knows I have defended KG for years, and think he gets way too much blame whenever anything goes wrong. It is fair to wonder, however, if his offense has grown stale. The Giants have run the same system for 10 years now. Is it time for a new approach? Manning has 77 turnovers since 2010, the most of any player in the NFL. Would he benefit from a new system, a new voice, maybe even a quarterbacks coach who has actually played the position?

Defensive coordinator Perry Fewell is doing everything he can this year to make things happen, and the defense has not been bad. It's been decent, despite surrendering 36.5 points per game. Fewell's biggest defensive problem is that he doesn't have any dynamic play-makers. Still, if the Giants keep surrendering points at this pace there will be a price to be paid.

The Giants can't punt, can't make a field goal, can't return punts or kickoffs and can't seem to tackle the other team when it's their turn to run anything back. I know he can't kick the ball, but special teams coordinator Tom Quinn has to be held accountable for some of that.

It is time for the Giants to realize that what they are doing isn't working, and that is probably because many of the guys they banked on no longer have enough in the tank. The future needs to begin now. Who knows, we might even find out that it will make the present a bit more bearable.