Perry Fewell: Defense needs to 'go back to work'

Share All sharing options for: Perry Fewell: Defense needs to 'go back to work'

The New York Giants defense has looked like a shell of its former self, with an abysmal pass rush putting pressure on nobody other than its own secondary.

What looked like a fluke last season, as the unit dealt with a rash of injuries, has continued in 2013. And through three games, the Giants have tallied all of three sacks, which is tied with the Pittsburgh Steelers for fewest in the league.

Defensive coordinator Perry Fewell said he felt his defense was able to generate pressure on Carolina Panthers quarterback Cam Newton early Sunday in the lopsided loss, but in order to straighten out the issues the unit will have to play together, get the right mindset and then properly execute.

"Right now, as a team, we're not playing good team football, so it's tougher that way. We normally complement each other, and when we start complementing each other the offense, defense and special teams -- then we'll play better football," Fewell said. "Physical is a mentality, and then it's in an action. The mentality is to be a physical football team, then you have to put it in the action and you have to believe it. That's what we're working toward."

The pass rush begins and ends with Jason Pierre-Paul, who is still recovering from offseason back surgery. Pierre-Paul said he's moving a lot better, and since he didn't participate in training camp the regular season is the time for the defensive end to get into football shape.

Fewell said JPP is getting into better shape, estimating he's at a level close to where you'd see players in the third preseason game. As he continues to improve in terms of practice and conditioning, he expects to see similar effects during games.

"He's starting to get into his groove a little bit," he said. "I've seen him improve each day and just listening and hearing defenses called and executing the defensive calls without having to think so much in these last three weeks. He's getting more comfortable as a football player again."

But as JPP gets into shape, his compatriots along the defensive line are not lending a hand.

Veteran Justin Tuck, who vowed to have a bounce-back season, has .5 sacks. Since moving back to defensive end, Mathias Kiwanuka has one sack. 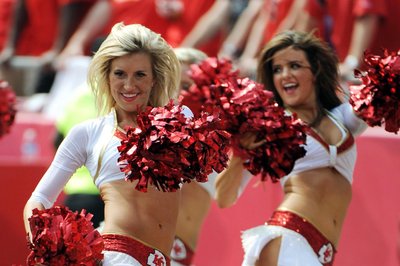 Ugly truth is this does not look good for the Giants.

Fewell said he can tweak some things with his defensive backfield and linebacking unit to perhaps help the defensive line, and that change is certainly needed. And one change could be the presence of rookie Damontre Moore, who is now healthy and ready to contribute.

One way to jumpstart the defense is to force some turnovers. Of course, Week 4 brings the challenge of Alex Smith and the Kansas City Chiefs, who own the best turnover differential (+9) in all of the NFL.

The Giants have forced a pair of turnovers so far, and they'll have to face Smith, one of the best in the game at securing the football. But Fewell believes if they can rattle Smith, rediscover their pass rush a bit, they'll have a chance on Sunday.

"The quarterback is doing an excellent job of taking what the defensive gives him ... and he doesn't feel pressured into making bad decisions," Fewell said. "You're hoping that you can force him to make some bad decisions."