Share All sharing options for: Giants at Chiefs: 'Five Questions' with Arrowhead Pride

The desperate, winless New York Giants (didn't we say the same thing last week?) face the unbeaten Kansas City Chiefs on Sunday. With that in mind our weekly 'Five Questions' segment this week is with Arrowhead Pride editor Joel Thorman.

Ed: We see the 3-0 record. What has Andy Reid brought to Kansas City that had been missing?

Joel: Confidence. Experience. A different style. Things had grown stale here over the past few years and Andy Reid just brought the "been there, done that' attitude that KC had been lacking. I knew I wasn't crazy the past couple of years saying the Chiefs had the talent to win. This year much of that is bearing out as a lot of the Chiefs success is due to some of those core players. Andy Reid came in and tidied the place up. Of course there are the other parts -- Bob Sutton's defense playing outstanding, Alex Smith yet to turn it over, plus-9 turnover ratio -- but really Andy Reid is what's been missing. 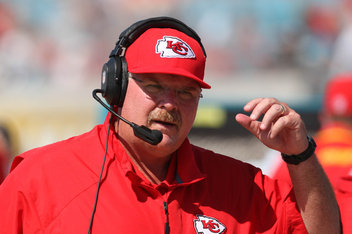 Ed: Same question with Alex Smith. Obviously the 49ers decided they could not win big with him. What does his presence mean for the offense?

Joel: Alex Smith is in an interesting situation. Historically he has done well when he's asked to do less. Andy Reid's offense asks a lot of the quarterback. In the end you're seeing a mix of the two. Alex Smith may be passing the ball more, but he's throwing high percentage passes. In other words, he's not going deep. The Chiefs have been good in the red zone, which is key. They've also been able to close out the last two games with clock-churning drives, which has clinched the game in both cases.

Ed: What KC player should we really watch out for on offense?

Joel: Gotta be Jamaal Charles. He had 92 yards rushing and 80 yards receiving last week. The rushing is nothing new. But the receiving part is. One of the offensive story lines for the Chiefs this season was that Charles would see less carries in Andy Reid's offense, but enough receptions out of the backfield to make up for it. Charles has 15 receptions over the last two weeks so he will be a factor in the running game and the passing game.

Ed: What KC defensive player should we watch out for?

Joel: Another easy one: Justin Houston. He leads the NFL in sacks with 7.5. The Chiefs lead the NFL as a team with 15. He's a big deal. You can usually tell if Houston is going to pop off early in the game. And when he does ... watch out. He doesn't always stop with just one. In just over two seasons he has sacked the quarterback in 11 different games. Seven of those were multi-sack games. He is linked to Tamba Hali, another pass rusher that's pretty good. Add in pressure up the middle from Dontari Poe, and the Chiefs can bring it.

Joel: Three weeks ago I had the Chiefs losing this game. 3-0 changes things. Headed back to Arrowhead, the Chiefs should win this. 23-19, Chiefs.

BONUS QUESTION: Andy Reid is doing a great job, which we would have expected. Seriously, though, the guy looks AWFUL in all that red. Agree or disagree?