'Wet Willies' to everybody connected with the New York Giants. That's really the only judgment that can be made after Sunday's 38-0 loss to the Carolina Panthers. This game was a fiasco in all aspects, leaving the Giants 0-3 and having been outscored this season 115-54.

How bad are the Giants right now? No other NFL team has given up 100 points. The 0-3 Minnesota Vikings have surrendered 96. Only five teams have scored fewer than 54 points.

The Giants can't run the football. Sunday they couldn't throw it, either. They can't do either of those because they can't block. They can't hang onto the ball, turning it over three more times on Sunday. They are a league-worst -9 in takeaway/giveaway ratio. 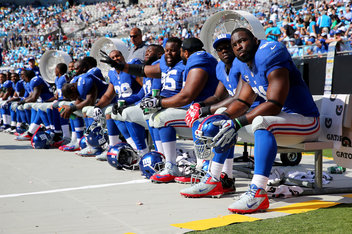 Complete coverage of the carnage from Sunday's loss to Carolina.

They can't rush the passer. Sunday they got one sack and one pressure on Carolina quarterback Cam Newton, both from defensive end Mathias Kiwanuka. Jason Pierre-Paul got nowhere near Newton. They can't defend the run. The Panthers ran for 194 yards on 46 carries (4.2 yards per carry), with DeAngelo Williams getting 120 yards on 23 carries.

They can't get stops when they need them. They did get one nice play from Aaron Ross on Sunday, an interception that put the ball at the Carolina 17-yard line. The offense, of course, could not take advantage of that gift. With the score 17-0 and the Giants still having a chance the defense surrendered scoring drives of 65 yards on 13 plays and 80 yards on six plays the first two times the Panthers touched the ball in the second half. In all, the defense surrendered four drives of 10 plays or more in duration.

The Giants can't punt. I don't know what has happened to Steve Weatherford, but he was atrocious on Sunday for the second straight game. They can't kick field goals. Josh Brown missed a 37-yarder in perfect weather conditions, shanking to the left a kick a professional kicker has to make.

It might be time to stop talking about how much talent the Giants have, about how they aren't playing up to their capabilities. They have lost five of six regular-season games, getting blown out of four of them. They lost their final three preseason games, exhibiting many of the same problems they have shown in the first three games that counted. If there isn't that much talent you have to begin questioning the roster that was constructed, which begins with GM Jerry Reese. If they are that good and they aren't performing then you begin to wonder why. Tom Coughlin is going nowhere unless he chooses to retire at season's end, but if this continues there will be coaches who pay the price.

In terms of 'Kudos & Wet Willies' there are players who could be exempted from the 'Wet Willies.'

Eli Manning could get 'Kudos' simply for surviving what might have been the worst beating of his career. David Wilson and Rueben Randle could get 'Kudos' for at least trying to make plays. Prince Amukamara, who did a good job on Steve Smith, could get 'Kudos.' Aaron Ross, who had that interception and batted away a touchdown pass while he was also getting torched for a pair of touchdowns, could be given a 'Kwillie.'

This performance was so repugnant, however, that in addition to basically handing out a team-wide 'Wet Willie' a new category has had to be created for the atrocious work of two specific groups. The pitiful work of the offensive and defensive lines, maybe even the entire defensive front seven, has earned them 'Double-Fisted Wet Willies.'

Let's look at each.

Offensive Line: By my count, Will Beatty gave up three sacks and had a touchdown-negating holding call. Chris Snee gave up two sacks and Justin Pugh and Kevin Boothe were each responsible for one. Beatty is supposed to be the anchor of the line and has been terrible in two games. Pugh is struggling to become a capable NFL player. In the middle, Snee, Boothe and center David Baas look old and overmatched. Snee and Baas are probably nowhere near 100 percent physically. Boothe is a journeyman who played well last season, and right now that looks like a performance he can't repeat.

Defensive Line: It's time to stop talking about Pierre-Paul's back. He is generating no pressure on opposing quarterbacks, and that's a major issue. The Panthers pushed the Giants around Sunday, especially in the second half. There were gaping holes everywhere when Carolina ran the ball, and little pressure from the pass rush -- for the third straight week -- when the Panthers threw it.

You simply have no chance to win when you get pushed around at the line of scrimmage. Unfortunately for the Giants, they are getting pushed around on both sides of the ball.