Let's look at all seven of the interceptions thrown by Eli Manning so far this season.

Share All sharing options for: Eli Manning and interceptions -- what's the story?

New York Giants' quarterback Eli Manning says "Every interception has its own story." Manning has, as has been widely discussed, thrown a league-high seven interceptions in two games. Let's see if we can uncover the story of each interception.

This one came on the Giants' first offensive play of the season, a screen pass for David Wilson that was picked off by Dallas Cowboys' defensive end DeMarcus Ware.

What do we see in the photo above as Manning releases the ball? We see Wilson circled, with Ware clearly in the path of the throw. Should Wilson have drifted farther to the outside rather than get clogged up in the traffic inside? Probably. Look at the next shot and we see how much space there was if the Giants had been able to get Wilson outside, leading offensive coordinator Kevin Gilbride to say the pass "might have gone to the house" if it had been completed.

In the end, whether or not Wilson was in the right place, Gilbride said Manning "should have just thrown it into the ground." That's a rough way to start the season.

This one occurs with 8:58 left in the first quarter and Dallas leading, 3-0. It is really difficult to tell whether Manning intended this pass for Jerrel Jernigan, who in the slot and is running an out or hook route or whether he was trying to hit Rueben Randle, running a post. Jernigan leaps to try to make the catch, but you can see Randle coming open. The ball is tipped by Jernigan and intercepted by Will Allen. I'm not sure who to fault on this one, but Randle and Jernigan are awfully close together. Somebody has to be in the wrong place.

This was the second intercepted screen pass, and this one is clearly on running back Da'Rel Scott. As the play unfolds Manning expects Scott to turn outside. Instead, the running back turns late -- and to the inside -- and has the ball glance off his outstretched hand for an interception that ends the Giants' chance to win.

"We have some inexperienced backs who are just learning how to play the game so they didn't float out," Gilbride said. "We threw two interceptions on two screens, which is maybe the first time in 25 years in the National Football League."

Here there are 16 seconds left in the first half, the Giants trail the Denver Broncos, 10-9, and have the ball in field-goal range at the Denver 28-yard line. It is first down and the Giants take a shot into the end zone, with Manning looking for Hakeem Nicks.

It looks like Nicks, running a post, is covered and Manning admits he wants to throw this ball away. You see that Manning has pressure as he releases the ball as Justin Pugh has been beaten on the play. The ball ends up being thrown shorter than intended, perhaps with the pressure causing the underthrow. It turns into an easy interception for Dominique Rodgers-Cromartie, and a back-breaking play for the Giants.

This one came on the first play of the fourth quarter and is pure misfortune. Denver leads, 24-16, and the Giants have the ball at their own 28-yard line. Manning tries to hit Randle on a  quick slant, the ball is knocked away, hits the defensive back in the foot, bounces into the air and is intercepted. Nothing to do there but shake your head. 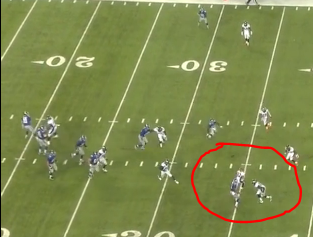 At this point the Giants are behind, 38-16, and there is 7:43 left. Manning throws a deep ball into triple coverage intended for Randle that is easily intercepted in the end zone. Manning clearly understands this is a ball that should not be thrown under normal circumstances, but the score and time remaining dictated that he take a chance.

"Hopefully we just don't get in those games where you're down 22 points in the fourth quarter. At that point, I like to tell myself, ‘don't throw interceptions, don't force things when you don't have to,' but I'm going to compete. If it's fourth and 10, I'm going to give a guy a shot to make a play ... I'm not going to lay down," Manning said.

This one came with 57 seconds left and the outcome long ago having been determined. From the Denver 20 Manning tries to hit Randle. The young receiver breaks off his route at the 10-yard line while Manning lofts this one to the end zone. The quarterback took the bullet for this one, saying Randle did the correct thing.

By my count you can blame Eli directly for four of the seven interceptions -- one in Dallas (the first one) and three of the four vs. Denver -- although the last two interceptions were meaningless when the game was already out of reach. Manning has, in my estimation, made one throw in each of the first two games that damaged the Giants' chances to win.

Manning has thrown 20 or more interceptions in two of his nine seasons. He might be headed for a third, and 59 percent of those who have voted in our recent over/under Manning interception poll think he will go over 20.5, the number Bovada has chosen for its over/under prop bet.

Hall of Fame coach and analyst John Madden recently talked about Manning's interceptions. His take was that the high-risk, high-reward nature of the Giants' offense, and the fact Manning doesn't seem concerned about protecting a pristine passer rating, will lead to a few more picks.

"Eli is a guy that will do that, but I don’t necessarily think that’s a bad thing," Madden said this week on "Mad Dog Sports Radio" on SiriusXM. "I think there are so many quarterbacks on the other end that are willing to throw that screen, that bubble screen, throw it out to the wide receiver quickly, go to the check-down, do all that stuff – throw the ball behind the line of scrimmage and within five yards. They don’t take shots down the field. Now the more shots you take down the field, the more big plays you’re going to have, but the more opportunities there’s going to be for turnovers and interceptions.