Good morning, New York Giants' fans! Here are some of the stories making headlines around the Giants this morning.

Veteran cornerback Aaron Ross did not play a snap on defense Sunday vs. the Dallas Cowboys. Ross, pushed down the depth chart by the solid play of Terrell Thomas, did not complain.

"I don’t know what the role is but I’m prepared for any time they call me. Prince went down in the Dallas game and they called my number and I was ready and prepared to go in and help the team try to make plays. If my number’s not called, I will be the supporting cast and if it’s called, I’ll be ready to go out there and ball," he said.

Corey Webster missed practice on Thursday with a hip injury. If that is serious enough to limit or sideline him on Sunday the Giants will need Ross to be ready. 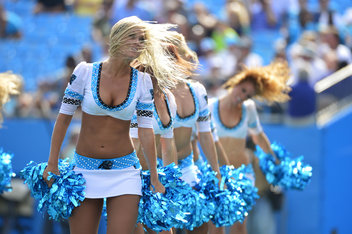 Complete coverage of Giants vs. Panthers.

The New York Giants are averaging a woeful 2.2 yards per carry and are last in the NFL with 73 rushing yards. So, Kevin Boothe, what is going on with the offensive line?

"I think it’s one of those things where all five of us have to execute. It’s not like other positions where you can get an outstanding play by one player and it kind of masks the other things. We all have to work together in unison and all be successful in order for the ground game to work," Boothe said. "For whatever reason, we haven’t been as successful, obviously through the first two games, but we’re a confident group and we saw a lot of good things out there. We’re confident that we will do better.

"It’s breakdowns here and there so we have to all be executing at the same time on a more consistent basis."

As we have discussed here at length the Giants' pass rush has not been up to par thus far in 2013. Defensive end Mathias Kiwanuka knows the defensive line's performance is being criticized.

"There are guys out there working their butts off. The point of the matter is that we’ve got to do enough to win the game. We pride ourselves up front as being that group that can take over a game. We haven’t done that," Kiwanuka said.

Weatherford Aims To Bounce Back

Punter Steve Weatherford had what was probably the worst game of his Giants' career Sunday vs. the Denver Broncos. He is looking to redeem himself.

"I literally just had a crappy game," Weatherford said. "I feel like I let my team down. I’ve been on this team for three years and I felt like I’ve been consistent every single week, punt to punt. Once in a while you are going to have a bad punt, but that was a bad game. Obviously, I’m disappointed, but at the same time, I know that’s not me. I just need to roll up my sleeves, work hard this week and keep it behind you. I’m ready to move forward."

Ralph Vacchiano of the Daily News says the two super Bowl trophies the Giants have won with Tom Coughlin as coach and Jerry Reese as GM mean they deserve the benefit of doubt after an 0-2 start.

Head coach Tom Coughlin spoke about the loss of his brother, John, who died Monday after a fall while stepping out of a taxi. Coughlin admitted to an "emotional tug of war" and that coaching this week is difficult because "you’re not there for anybody" in the family.

Linebacker Spencer Paysinger is calling the defensive signals for the Giants, and earning the respect of his teammates.

Prince Amukamara might be 'The Black Tim Tebow.' His teammates have no problem with that.

Mark Herzlich did not play a lot Sunday vs. Denver as the Giants spent most of the game in their nickel defense with only two linebackers, Paysinger and Jacquian Williams, on the field. He knows this Sunday should be different.

Andre Brown ran for 113 yards against Carolina last season, his best game as an NFL player. As he recovers from a fractured leg Brown admitted this is a tough game for him to watch.