JPP expects to improve on a week-to-week basis, and says he is already close to 100 percent.

There's a certain element lacking from the New York Giants this season: a pass rush.

The stalwart of Giants defenses year after year, this year seems to be a continuation of 2012, when the team tallied all of 33 sacks, which ranked 22nd in the NFL.

What is going on with the pass rush? 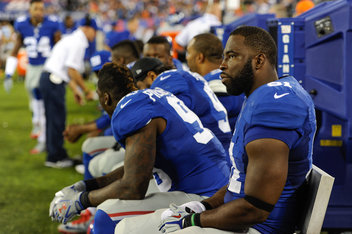 This season is off to another disappointing start, as the Giants have totaled just a pair of sacks through their first two games. One of which was recorded by Jason Pierre-Paul, who is being counted on to be the Giants' premier pass rusher. Just weeks removed from back surgery, Pierre-Paul is not yet 100 percent.

"My head is thinking but my body isn't responding," JPP said. "I know I'm not playing as like I did in the past ... I'm just doing my best. No excuses. I just have to get healthy."

Pierre-Paul registered his lone sack of the season in the opener against the Dallas Cowboys but was quiet last Sunday against the Denver Broncos.

Though Pierre-Paul was unable to get to Peyton Manning, he believes he played well -- even better than he did Week 1 -- and that he'll continue to improve with each week.

Pierre-Paul is still recovering from offseason surgery but claims to be pain free -- a far cry from the condition in which he played through a year ago.

Last year back pain plagued the defensive end not only on the field but during everyday activities. And with that out of the way, Pierre-Paul explained now it's simply a matter of getting back into football shape. Keep in mind he missed training camp and the preseason was thrust back into action Week 1. So if he's a little rusty now, he should return to form sooner rather than later.

"I feel like I'm close. There have been times I have gotten to the quarterback, (but) it was like a second too late. I'm getting there," Pierre-Paul said. "It takes time, but that's no excuse ... I have to do whatever it takes to win, to help my team win. Right now I'm not doing a good job."

While Pierre-Paul appears to be his own harshest critic, opposing coaches and coordinators still fear and game-plan for the pass rusher.

Carolina Panthers coach Ron Rivera admits Pierre-Paul may not be playing at a level he is accustomed to, but he's more a result of coaches making necessary adjustments to counter his skill-set.

"I still see a guy who's a dynamic football player. You still have to account for where he is," Rivera said. "I'm not sure if it's because of coming off surgery as much as people know who he is, (but) when you game plan for a player it's going to be hard for that guy to make his normal plays ... That's what happening -- people are paying him a lot of respect."