Dennis Esser takes a look at the Giants' fantasy prospects as they face a desperate Carolina Panthers team this coming Sunday.

Week 3 of the NFL season has the New York Giants traveling to Charlotte North Carolina to take on the Carolina Panthers. Much like last season both teams come into their week three match up with identical records. Only this time they are both winless. The Carolina Panthers have invested quite a few draft picks in recent years on their front seven and have held their first two opponents to a combined total of 36 points. In contrast the New York Giants have yet to give up less than 36 points through two games.

The Giants running game has looked anemic through the first two weeks and Eli Manning has looked more like the 2010 version of himself recently, as he has turned the ball over seven times through two games, than the ex-Super Bowl MVP. The only real bright spots for the Giants' offense have been Victor Cruz and Brandon Myers from a receiving standpoint. Luckily the Giants aren't running into an offensive juggernaut in Carolina and should be able to run the offense they game plan for, instead of going into catch up mode right away.

I think the Giants take some of the reads out of Eli's hands this week and cut the field in half in certain situations. Eli has been throwing low percentage balls when the Giants have gotten behind and hasn't been able to take what the defenses have been giving him. I expect him to be more efficient, if not less spectacular Fantasy-wise. 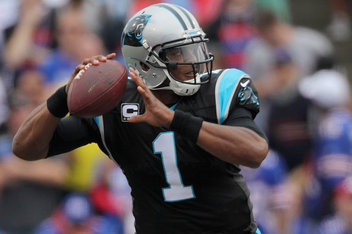 Keep up with our Giants-Panthers coverage all week on our Hub Page.

Wilson's production is anyone's guess, but the Panthers did get gashed at times by C.J. Spiller last week so a quick back may be able to find some running room. I am keeping him on my bench even though this matchup looked enticing when I drafted him. I would NOT trade him now with his stock at an all time low. Running back fortunes can change with one big play, so just wait and hope that he finds his stride.

I really can't believe it's Week 3 of the NFL season (in 2013) and I am discussing Brandon Jacobs fantasy value. I believed that Jacobs was going to come in and be a coach and an occasional short yardage back, but last week he saw significant snaps that seemed to prove that notion wrong. He has clearly lost most of his quickness (he didn't have much when he was young), but he hasn't lost the ability to vulture touchdowns. He could be a play in a deep (14-team) standard scoring league where you may have some injuries. (Steven Jackson, Ray Rice, Eddie Lacy)

Da'Rel Scott had a nice game in the midst of a difficult situation this past Sunday. The Giants tried to get tricky and use him on a goal line draw play, but he was easily taken down. He blocked well when called upon and had a very nice catch and run on his touchdown reception from a "shot putting" Eli Manning. I think Scott has settled into the third down role as well as any spread two-minute drill time. He could be used in desperate situations in very deep PPR leagues.

The Carolina Panthers haven't been able to cover the slot receiver through two weeks and now face arguably the best slot receiver in the game. If they choose to flood his area with defenders then it will make it easy for Eli to work the sidelines with Hakeem Nicks.

I very much doubt that the Panthers will play off coverage away from Cruz like they did last year when Ramses Barden ripped them for more than 100 yards in Week 3. I do think Nicks will see his fair share of man to man coverage and should be able to have a nice game near his home town. As long as his finger is healed up this week he should have nice numbers.

Randle got plenty of targets last week with the Giants trailing, but failed to get on the same page with Eli Manning on several occasions. Randle is a young receiver that Eli and Gilbride have obviously decided is a match up they would like to exploit in certain situations, but it may be too soon for him to shoulder that load. He is not yet savvy in traffic and doesn't always run the best routes. He only has one drop, but Eli has thrown four interceptions when he has targeted Randle this year.

Myers was only slowed down by the dreaded "turf monster" last week, otherwise he would have added another touchdown to his resume. One thing that cannot be put under strengths on his resume is his run blocking, and I think we will be seeing his snaps come down just a bit this week because of it. Even though Myers has 13 receptions for 140 yards and a touchdown through two games, he has the second worst rating among all tight ends from Pro Football Focus.

NOTE: This week's projections come from me and not an outside source. ESPN is a little more optimistic with David Wilson's production for this week than almost all other sites.

Make sure to follow me on Twitter @Coachesser and head over to Facebook and like my page Coach Esser's Playbook so that you can get all the latest fantasy football news. You can also find last minute Start/Sit advice at www.coachesser.com, powered by NumberFire.