New York Giants' safety Antrel Rolle is never at a loss for words, and never afraid to provide an honest assessment of what is going on with the Giants. With them having started 0-2, Rolle was candid Monday about the state of the Giants.

"Are we a better football team? Absolutely, but are we showing that we're a better football team right now with an 0-2 record? No way. We need to understand that and we need to get extremely better. Not just a little bit better, but a whole lot better," Rolle said. "I don't think we're playing with the excitement, the enthusiasm. What it looks like from the sideline, and outside looking in, it seems like sometimes we're in it, sometimes we're not. I don't know the reason for that."

Why Can't The Giants Run? 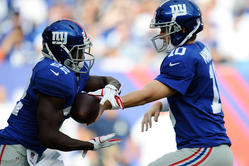 A play-by-play breakdown of Sunday's failings.

"We have a lot of opportunities in these first three games to kind of rewrite what this 0-2 is, the reality of this 0-2. We have to stop beating ourselves. We had a lot of opportunity to win both of these football games and didn't do it. Granted we played two pretty good football teams, but like I said, we had opportunities to play better than what we did."

With a league-high seven interceptions in two games, quarterback Eli Manning was asked on Monday about that rather startling total.

"I don't think I can just get worried about the number. I've got to look at the plays and look at the decision-making on my part. I think the first one was a bad decision. The next two weren't bad decisions or weren't bad throws, it was just bad circumstances. If it's fourth and 10, I'm going to give a guy a shot to make a play ... I'm not going to lay down," Manning said.

"All week the media is going to be on the Giants telling them how much they suck and they’ll say it’s like 2007," the former linebacker told the Daily News on Monday. "But you can’t compare the two teams. That team was loaded with veterans. We didn’t question who we had at certain positions. This team is young. They have more question marks than answers.

"I think it’s going to be difficult for them," Pierce added. "We had an identity. We knew what we were. That’s the huge difference with this Giants team: What’s their identity?"

Giants’ Chain Reaction of Woe Begins With the Handoff - NYTimes.com

Eli On WFAN: Everyone Just Needs To Relax, Giants Will Be Fine " CBS New York

This Giants team hasn't done this before