A look back at plays that changed the outcome of Sunday's game vs. the Denver Broncos.

Sunday's game against the Denver Broncos didn't turn out quite the way the New York Giants had hoped, and it brought to the forefront again some issues that the Giants have had over the past few years -- specifically their red-zone woes and inability to run the football. The loss also puts into question whether or not the Giants will be able to start the year 5-2 or better, which they have done consistently under Tom Coughlin. Here is a look at five key plays. 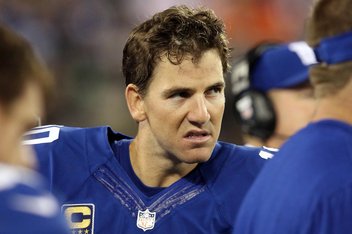 Who played well Sunday and who did not.

1. Rueben Randle fumbles the ball going into the end-zone.

This play ended up in the box-score as a five-yard illegal contact penalty against the Denver Broncos, but it was a big missed opportunity. Had Randle held onto the football the Giants would have scored their first touchdown of the game and gone up on the Broncos 10-7 as opposed to playing from behind the entire game because as a result of this lost opportunity the Giants settled for a field goal.

2. Victor Cruz steps out of bounds before hauling in a pass from Eli Manning at the Broncos 38-yard line.

This wasn't a back-breaking play by any means, but it was just indicative of the kind missed opportunities the game presented the Giants with. If Cruz had remained in bounds here the Giants would have had a 1st-and-10 on the Broncos 38-yard line in good position to get another early score. Instead they  had to punt the ball away. Again this was not as huge a play as some of the other turnovers or missed opportunities of defense, but just a let-down play.

3. Eli Manning throws a bad interception into the end-zone from the Broncos 28-yard line trailing the Broncos 10-9.

Again another lost opportunity. The Giants at this point only trailed the Broncos by one point and were driving down the field to gain momentum. They were poised to score and take the lead from the Broncos and as a bonus were set to receive the ball to open up the second half. Had the Giants scored a touchdown, or even a field goal here they could have gone into the half feeling a little better and perhaps opened up a cushion early in the second half. Instead the Giants turned the ball over and the Broncos never relinquished the lead the rest of the game.

4. Eli Manning throws an interception which leads to a Julius Thomas touchdown catch.

The Giants still had the game within reach trailing 24-16 when Eli Manning threw a pick on their own 36-yard line that was intended for Rueben Randle. Five plays later Peyton Manning connected with Thomas to put the game in a precarious position. This one was an unfortunate tipped ball that bounced off the foot of a defensive back and into the air rather than falling to the ground.

The dagger. Weatherford's Matt Dodge-eque punts had flirted with this potential disaster all day, and finally Holliday was able to capitalize on the line drive punt and put Giants fans out of their misery.

We could highlight other plays like Brandon Myers falling down on his own instead of taking a pass into the end-zone, or the Giants' 1-for-11 on third downs, but the bottom line is the Giants aren't playing clean, crisp football right now and it's leading to losses.

Hopefully the Giants can figure out their running game woes and come out and put away a reeling team in the Carolina Panthers this weekend.