The Fantasy Football world reacts to the New York Giants lack of a running game.

The fantasy football world was holding its collective breath each time David Wilson touched the ball on Sunday, hoping he wouldn't fumble away his chance at being the undisputed lead back with the New York Giants. Little did we know that the Giants' play calling and lack of a cohesive running game would be what held back the talented running back in week two, instead of his fumbling issue. While Wilson came out holding the ball as if his life depended on it, it seemed the Giants weren't ready to count on him in an expanded role.

JJ Zachariason of NumberFire took a look at the New York Giants in-game play calling and backfield playing time and came out believing that these issues could end up being bigger red flags for Wilson's current fantasy football starting potential then his propensity to put the ball on the ground.

Breaking Down The Running Woes 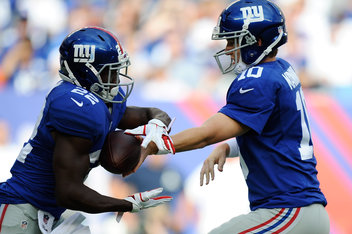 A look at every Giants' running play Sunday vs. Denver.

"On the first drive for the G-Men, with the game scoreless, David Wilson saw two carries and a target on five offensive plays. The first play of the game was a deep pass from Eli to Victor Cruz, good for 51 yards. Wilson had two carries for six yards, while newcomer Brandon Jacobs saw one for five. Fine. Great. The drive resulted in a field goal and the lead for the Giants.

Did David Wilson make a pass at Coughlin's wife after that three-yard loss? Because after the carry, which happened with over four minutes left in the first quarter, Brandon Jacobs started seeing the field on early downs. Guys, it’s not like we’re talking about Andre Brown here. We talkin’ bout Prac…Brandon Jacobs!

The next David Wilson carry occurred almost an entire quarter (three offensive drives and a couple of Jacobs carries) after his three-yard loss, and he touched the ball for a nice six-yard gain on first down. Wilson then had two more carries which went for two and six, and the drive resulted in a field goal after Eli Manning couldn’t complete a pass."

As you can see by JJ's tone the rest of the football loving world was just as confused as every Giant fan with the way the Giants were using Wilson. There was a clear disconnect happening in the running game and Kevin Gilbride didn't have the answers. While I kept waiting for the Giants to bring in Bear Pascoe and go double tight to get some running room it didn't seem to be on their list of priorities.

The Giants' touchdown drive that ended with a Brandon Jacobs 1-yard plunge had Zachariason scratching his head.

"After a Broncos touchdown, the Giants found themselves on their own 19 down by eight. Eli started to move the ball, but Wilson saw one carry (no gain) on the 12-play, touchdown-scoring drive. Brandon Jacobs, understandably (I guess), saw three carries within the Denver 5-yard line. Da’Rel Scott saw one, too.

This drive told me a lot. The Giants were pass-heavy, which isn’t incredibly surprising; the team and play calling is a "giant" panic attack on offense. David Wilson, to note, wasn’t part of that attack.

The other takeaway here: David Wilson probably won’t be the goal line back because of his fumbling issues and smaller build. That’s fine, as Andre Brown was going to assume that role anyway before he was hurt. But even if Wilson sees a bigger role, don’t expect him to score seven or eight touchdowns this year."

I agree with a lot of what JJ had to say in his article, but I tend to be a little apologetic to the guys on the offensive line. The lack of practice time as a group has clearly affected the group as a whole. Veterans Baas and Snee had tough days against the Broncos and rookie Justin Pugh missed some key blocks. Henry Hynoski's injury in the preseason and subsequent lost practice time is another factor in the lack of continuity in the running game.

JJ Zachariason (@LateRoundQB) goes into more detail about the Giants leaning toward a RBBC approach going forward and when to put David Wilson in your fantasy football lineups here at NumberFire.