Grade the New York Giants' performance vs. the Denver Broncos

Share All sharing options for: Grade the New York Giants' performance vs. the Denver Broncos

Let's try something we haven't really done here before. Let's give you an opportunity to grade the New York Giants' overall performance in their 41-23 loss to the Denver Broncos Sunday night.

First, my overall grade for what we saw from the 0-2 Giants Sunday night: D-

I was really close to giving the Giants an 'F,' but there were -- barely -- enough things about the game I liked to keep me from doing that. 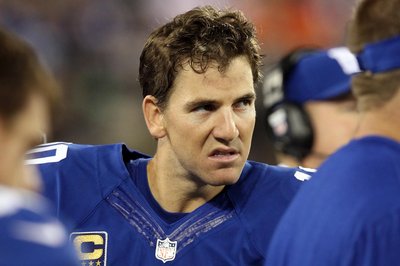 Rushing Offense: Only 19 carries in 23 yards. If I could give something lower than an 'F' I would. Maybe a 'Triple F.' Maybe a grade of 'hey, did you guys ever attend this class?' Grade: F

Passing Offense: Eli Manning's 362 passing yards was a nice number. His four interceptions, 58.3 passer rating and all the plays the Giants left on the field weren't. Grade: D

Rushing Defense: The Giants gave up only 3.8 yards per rushing play (29 carries, 108 yards), but broke down twice. They allowed rushing touchdowns of 20 and 25 yards on similar runs around right end by Knowshon Moreno. Grade: C

Passing Defense: The secondary did little wrong, but the invisible pass rush hung them out to dry. Grade: C-

Special Teams: Punting and putn coverage get an 'F.' David Wilson did nothing on kickoff returns. Josh Brown made three field goals, salvaging something for this group. Grade: D

I can't give you a group-by-group poll, but vote below and let us know what you thought of the overall performance. If you want, drop your category-by-category votes in the comments.