'Disappointed' Coughlin says 'We have to hang in there'

Coughlin reacts to being 0-2 after loss to Broncos.

Share All sharing options for: 'Disappointed' Coughlin says 'We have to hang in there'

The New York Giants are 0-2. After they lost their season-opener to the Dallas Cowboys head coach Tom Coughlin was emotional when he spoke to reporters. Sunday night, after a 41-23 loss to the Denver Broncos, Coughlin was much more measured.

"I could stand up here and be fiery if that's what everybody wants," Coughlin said. "There's a little bit of a hole in my stomach. I'm greatly disappointed, what can I tell you?" 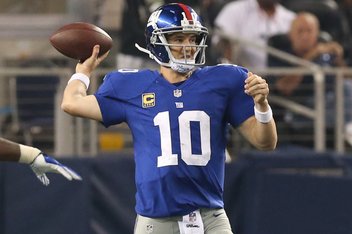 The Giants ran the ball 19 times for only 23 yards, forcing Eli Manning to throw the ball 49 times. He threw four interceptions in those 49 attempts.

"Quite frankly to not be able to run the ball, to have so few attempts at rushing the ball, it's just not our style," Tom Coughlin said. "We haven't had a lot of success with it.

"To see the ball thrown that many times, some of the results are very difficult to explain. You've gotta have a better run result than we're having."

Coughlin thought the Giants did a good job defensively against Peyton Manning and the Broncos. Denver's two biggest offensive plays were touchdown runs of 20 and 25 yards by Knowshon Moreno.

"I thought our defense played hard. I thought they handled the tempo that the Denver offense was trying to utilize," Coughlin said. "He made some plays no doubt, but we made some plays, too.We kept a very high-powered offense under control. If we would have had some consistency through the four quarters on offense, even if it was the kicking of field goals, it would have been a decision that would have been made in the fourth quarter."

Manning now has an NFL-worst seven interceptions in two games.

"I think Eli would be the first to tell you it's not the way we want it to be," Coughlin said. "Somehow, some way we've got to stop the interceptions."

At 0-2 the Giants are only one game behind the Dallas Cowboys and Philadelphia Eagles in the NFC East. No NFC East team won Sunday, leaving Dallas and Philly 1-1 and the Washington Redskins 0-2.

"We have to hang in there, we have 14 games to go," Coughlin said. "We've been 0-2 before, we've dug ourselves into a hole before and we've been able to fight our way out of it. When we did it was with team, but the performance level has to come up."