Good morning, New York Giants' fans! A few hours from now we will know if this was a good day for the Giants during which they evened their record at 1-1, or a bad one during which they fell to 0-2. To help you prepare here are your gameday news and notes. 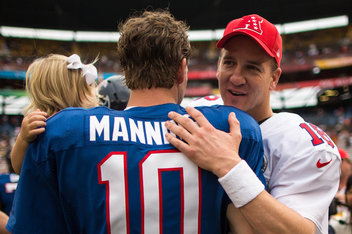 The media spotlight, of course, is on Manning Bowl III, the match-up between Eli Manning and Peyton Manning. We did a 'Tale of the Tape' here at Big Blue View earlier in the week, asking who you would take as your quarterback for one must-win game. Sixty-three percent of 630 voters took Eli.

The Miami Herald has done its own 'Tale of the Tape.' The Denver Post offers a look at the sibling rivalry between big brother Peyton and little brother Eli. Archie Manning is just enjoying the journey, according to New York Daily News columnist Archie Manning.

Another big storyline Sunday at MetLife Stadium will be the return of Brandon Jacobs. He will be wearing an unfamiliar number, 34, but the Giants are looking for Jacobs to bring his familiar attitude back to East Rutherford, something the Giants could really use. Big Blue View's Kelsey O'Donnell took at a look at Jacobs' return earlier in the week.