New York Giants' safety Antrel Rolle said Friday that he expects to play Sunday vs. the Denver Broncos despite sitting out Friday's practice with a sore groin. Rolle is officially listed as questionable.

"I'll be alright. I'll play through Sunday. Just more precautionary reasons. It's better to be smart than anything because Sunday is the most important day," Rolle said. "To be honest with you, I couldn't even tell you when it happened. Like I said, I'll be fine and I will be out there come Sunday." 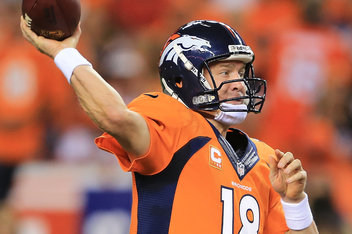 Allen Bradford: Being a Giant 'Surprising'

Linebacker Allen Bradford, the newest member of the Giants, said Friday he found it "surprising" that he ended up with the Giants.

"I had no idea what was going to happen. Once Seattle released me, I wasn't expecting to be picked up. I was expecting to sign back to Seattle's practice squad," Bradford said.

Prince Amukamara practiced only once this week after suffering a concussion against the Dallas Cowboys. He said Friday, however, that he feels prepared to play.

"I've been studying like crazy. I know this is a big week," Amukamara said. "I was always studying and preparing like I was going to be out there. I don't think the doubt was in my mind. It probably was in the doctor's mind but I was always prepared to play."

Former Giants' running back Ahmad Bradshaw said this week he will reach out to David Wilson after Wilson's two fumbles against the Dallas Cowboys. Bradshaw fumbled seven times in 2010, his first season as a starter for the Giants.

"I’ve been in that same predicament, and it’s all mental,’’ Bradshaw told The Post by phone on Thursday. "As a running back, it gets into your head.’’

Mark Herzlich says his "preparation is the same" now that he is the starting middle linebacker. One interesting note to come out of the linebacker situation is the revelation that Spencer Paysinger has been wearing the radio in his helmet and calling defensive signals, which he will now continue to do. That makes sense as Paysinger is the one linebacker on th4e field for nearly every play.

Could David Wilson's fumbling issues be traced back to his days as a track star, which requires a different technique than running with a football?

The Giants would be well-advised to win on Sunday. Since 1990 only 11.6 percent of teams who have started the season 0-2 have made the playoffs.

Coach Tom Coughlin was obviously irate after watching his team commit six turnovers against the Dallas Cowboys. He told Giants.com that the post-game was "very difficult circumstances because, if I’m about anything, it’s about the opposite of what you saw.... I was almost in a state of shock."

Giants' defenders admit that prepping for Peyton Manning is awkward. They are careful what they say around little brother Eli Manning.

Denver cornerback Champ Bailey won't play against the Giants. He has been ruled out with a foot injury.