Eli Manning vs. Peyton Manning: Tale of the Tape

A look at the brothers Manning as they prep for Sunday's game at MetLife Stadium.

Share All sharing options for: Eli Manning vs. Peyton Manning: Tale of the Tape

Let's take a somewhat different, sometimes serious and sometimes light-hearted look at Eli Manning and Peyton Manning as they prepare to face each Sunday when the New York Giants face the Denver Broncos at MetLife Stadium.

I will call this a 'Tale of the Tape,' although I am not 100 percent sure exactly what I'm aiming to measure.

Let's put this to bed right now. Better quarterback? Peyton Manning is a clear first-ballot Hall of Famer and probably one of the five greatest players ever at his position. He is a 12-time Pro Bowler and a six-time All-Pro. He has three regular-season MVP awards and should surpass 60,000 career passing yards on Sunday -- he only needs 51. Eli is good, but he's not Peyton. Not in the regular season.

Now this is where it gets interesting. That, of course, is because Eli has morphed into, well, into regular-season Peyton during his postseason opportunities. Peyton has played below his career numbers during the postseason.

Eli has two Super Bowl rings to Peyton's one. Eli has had a habit of making magic happen, while Peyton has one ring but his teams have habitually fallen short of expectations. Eli is 8-3 in the postseason with a 61.6 percent competion rating and an 89.2 passer rating. Peyton has completed 63.2 percent of his postseason passes with 32 TDs, 21 INTs and an 88.4 passer rating. His teams are 9-11.

Advantage Eli in the postseason. 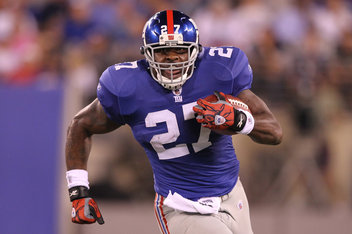 Everything you need to know leading up to Sunday's game.

Big brother has had the better of little brother in two meetings, winning both games. In those two meetings, Peyton's
Indianapolis Colts defeated Eli's Giants, 26-21, in New York in 2006 and 38-14 in Indianapolis in 2010.

The Giants were never competitive in the 2010 game, a 38-13 loss that was one of those debacles that seem to happen to the Giants every season. Eli completed just 13-of-24 passes for 161 yards with two TDs and an interception. Peyton went 20-of-26 for 255 yards and three TDs.

Eli said Wednesday that playing his brother is "neat," but added "Hopefully when I think back on these games that we played against my brother, I can think back and remember at least one win."

Both have hosted Saturday Night Live. Peyton has generally been funnier in commercials. 'Football On Your Phone' is, however, Eli's finest hour.

C'mon, you knew I couldn't pass up posting this one more time. No matter how I got around to it.

Who Ya Got For One Game?

OK. So, here's the deal. Peyton is clearly the more talented player and will end up with career regular-season stats that will dwarf Eli.

Which quarterback are you going to take for one game that you absolutely have to win? Regular-season Adonis (Peyton) or Postseason Superman (Eli)?

I take Eli. He isn't the better player, but I have seen the magic too many times now to ignore it. He is a great big-game and fourth-quarter quarterback and I wouldn't want anyone else -- expect probably Joe Montana -- in a game I had to win.

How about you? Vote in the poll.