The New York Giants featured a lot of studs and one dud in week one of the NFL season and now face the Denver Broncos at home in week two. A Manning brothers shootout may lead to some huge Fantasy numbers.

The New York Giants could not have started the season worse from a real life football perspective. Mental and physical errors plagued the Giants as they fell behind a divisional opponent in an important week one matchup. The Dallas Cowboys took advantage of every mistake and built up a lead that Eli and his receivers were almost able to overcome. The frantic comeback attempt had Eli Manning and his receivers at the top of fantasy leader boards.

Eli was able to overcome three interceptions and throw for 450 yards and 4 touchdowns. Victor Cruz ended up as the third-highest scoring wide receiver in fantasy football and proved to be the Giants best chess piece as he absolutely killed the Dallas Cowboys. Hakeem Nicks looked quick as he was able to top 100 yards, but wasn't able to get in the end zone. Rueben Randle was a surprise fantasy producer as he broke the 100 yard barrier as well, but I wouldn't expect that every week. Brandon Myers picked up a lot of action late to put him among the top tight ends of a high-scoring week one in fantasy football. 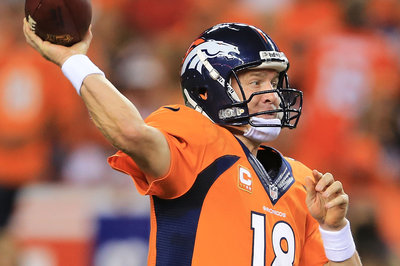 The only offensive player to not get in on the action was David Wilson. Wilson not only disappointed Giants' fans with his poor play, but also became one of the all time biggest week one busts in recent fantasy football memory. For example, Wilson was the fourth-most selected player (31 percent of teams) in daily fantasy football drafts on DraftStreet for week one yet managed to actually put up a negative score. In contrast, Manning was only picked for 2.4 percent of daily fantasy lineups yet finished as the number two player at his position.

Wilson's fumbling and the Cowboys' opportunistic defense definitely inflated the Giants fantasy numbers, but if you think the Giants players are in for a big correction in week two you may miss out on some serious fantasy points. The Manning brothers may put on a show in week two and hopefully for us we can not only see the Giants come out on top, but win some fantasy football match-ups as well.

Eli Manning -- NumberFire has Eli Manning slated for 287.44 yards passing, 1.56 touchdowns, and 1.49 interceptions. I have Eli topping 300 yards and throwing 2 touchdowns. As I am a Giant fan I do not like to give the statistical probability on turnovers, but if your league has a high negative for turnovers you can expect at least one.

David Wilson -- NumberFire has Wilson getting 15.05 carries for 54.78 yards and .34 rushing touchdowns. They also have him catching 2.77 passes for 19.31 yards. I am keeping Wilson on the bench this week if I have a viable option to start over him, but if I don't I would expect 12 carries for 63 yards and 2 catches for 14 yards. I am not selling him just yet and have seen running backs bounce back from similar disasters.

Victor Cruz -- NumberFire has Cruz getting 5.75 receptions, 76.72 yards, and .41 touchdowns. I have Cruz once again having a big week as he will be matched up against a sub-par pair of safeties and more than likely the fourth corner on the team. I have Cruz catching 8 balls for 97 yards and a touchdown.

Hakeem Nicks -- NumberFire has Nicks getting 5.24 receptions, 60.12 yards, and .31 touchdowns. I think Nicks showed in week one that he was sleep walking through the preseason. He looked very good even in a tough matchup against Brandon Carr and I expect a bigger game from him in week two. I have Nicks catching 7 passes for 105 yards and a touchdown.

Rueben Randle -- NumberFire has Randle catching 2.60 balls for 40.45 yards and .14 touchdowns. I think we were all pleasantly surprised at how quickly Randle became a big piece of the Giants passing attack against the Cowboys in week one. I have Randle catching 4 passes for 65 yards and no touchdowns.

Brandon Myers -- NumberFire has Myers catching 3.70 passes for 40.14 yards and .22 touchdowns. The Ravens really worked their tight ends against the Broncos in week one, but I think that had more to do with the fact that they are very thin at wide receiver. I like that Myers was able to show a nice rapport with Eli at the end of the game against the Cowboys and I think that could carry over to this week. I have Myers catching 5 passes for 56 yards and no touchdowns.

Wilson is not the only running back whoneeds to bounce back from a disappointing week one. Stevan Ridley found himself benched after fumbling twice when he was expected to put up huge fantasy numbers against the Bills. Shane Vereen filled in for Ridley and was the only running back to top 100 yards rushing on Sunday, but wound up breaking a bone in his wrist. C.J. Spiller, Maurice Jones-Drew, and Lamar Miller all had nightmare starts to their seasons and hope to get back on track week two.

If you need any last minute fantasy advice make sure to follow me on Twitter @Coachesser or like my Facebook page CoachEsser's Playbook so that you can message me at any time. You can also see all of my latest podcasts and articles by visiting www.coachesser.com.