A look at some of the numbers heading into Sunday's Giants vs. Broncos game.

The New York Giants (0-1) host the Denver Broncos (1-0) on Sunday. Here is a brief look at some of the numbers entering the game.

This is, of course, Manning Bowl III. The Giants and Eli Manning have lost the first two encounters with big brother Peyton Manning, both of those when Peyton was quarterbacking the Indianapolis Colts. Peyton's Colts defeated Eli's Giants, 26-21, in New York in 2006 and 38-14 in Indianapolis in 2010.

Tale Of The Tape 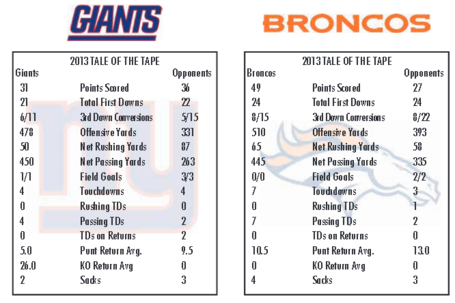 When Victor Cruz (118), Hakeem Nicks (114) and Rueben Randle (101) all passed the 100-yard mark in receiving yards Sunday vs. the Dallas Cowboys it marked the first time the Giants ever had three receivers do so in a single game. ... Giants coach Tom Coughlin is tied with legendary Giants coach Steve Owen for 16th place in all-time coaching vicotries with 151.

Pro Football Focus graded Denver's offense at only +1.2 overall despite Denver's 49 points and Manning's seven touchdown passes vs. the Baltimore Ravens. Denver's defense scored +11.0  The Giants' offense was -11.6 vs. the Dallas Cowboys, while the defense graded at +8.8.