Good morning, New York Giants' fans! Here are some of the stories making headlines around the Giants this morning.

Running back David Wilson, whose two costly fumbles Sunday night got him benched, spoke only briefly to reporters.

""(I'm) going back to work," Wilson said. "Get this game behind me. God will bring me through it. I have got to work hard. And my teammates have my back. I'm looking forward to moving to the next game." 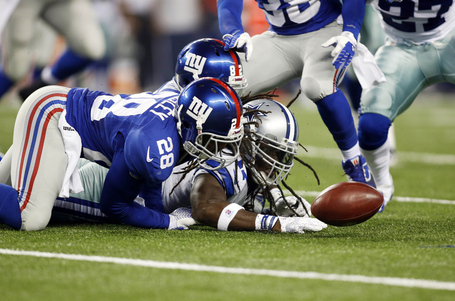 Who did well, and who did not, Sunday against Dallas?

"I don't know what kind of faking he saw, but if guys go down and they never return to the game, obviously he's not faking. They got the win, he just needs to be satisfied about the win because a game like that will never happen to us again. Even with six turnovers, they were still scratching their heads at the end of the game, hoping/wishing for a play they did get at the end of the game. I can care less what Jerry has to say. When we play those guys again, it will be a little different outcome."

Politi: Tom Coughlin faces another major challenge with disappointing Giants | NJ.com
It's just one game, but many of the same problems from last season are still hounding the Giants.

Giants report card Week 1: Running game gets an F : page all - NorthJersey.com
The Giants running game was as bad as it can get against the Cowboys on Sunday night. It wasn't the only bad part of New York's game.