Long-time Giants backup QB David Carr discusses playing teacher to Ryan Nassib, as well as vying for the No. 2 job

Longtime New York Giants backup quarterback David Carr finds himself in one of the more peculiar situations a veteran can be in.

Right now, he's competing with a highly-touted draft pick for the right be Eli Manning's No. 2. But as the same time, as a long-time professional in the league, he's tasked to play the role of mentor.

Thus far, Carr is doing his best with the balancing act he's inherited. And while he and rookie Ryan Nassib battle it out for the backup job, the 12-year vet is comfortable with whatever what the result is.

"When you're out there coaching and you help, you're doing what you're supposed to be doing," Carr said. "You're going to do the right thing, for the most part. But how plays shake out, how guys run their routes, how the defense plays -- it's out of your hands. All you can do is just go through what you know and just use your experience to your advantage. Whatever happens is in God's hands."

Both Carr and Nassib will get a chance to impress the coaching staff when the Giants play the Pittsburgh Steelers Saturday night in their preseason opener. With Manning not expected to play much at all, the two contenders -- along with Curtis Painter -- will likely see the majority of the snaps.

Carr said he is comfortable with whatever amount of playing time he gets Saturday night, which makes sense as the Giants have seen the backup in action four of the last five years. And according to Carr, he hopes all four signal-callers play well. 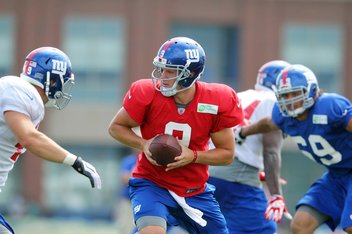 Ryan Nassib has had an up-and-down training camp to this point. How will he fare Saturday night against the Pittsburgh Steelers?

While Carr gears up for his 12th preseason, this will be the first for the rookie quarterback out of Syracuse. Carr recalled his first preseason game -- the surprising speed of the game and forgetting the plays you've recently learned.

Carr said he expects Nassib to revert to what he feels comfortable doing and what he has enjoyed success doing in the past, and hopes the young quarterback can ease his mind and perform as well as he's capable of doing.

"A football game is a football game; he's going to go out there and make calls and go to his reads and he'll learn," Carr said. "Whether it's good or bad, he's going to learn. If you stop learning, that's where you stop getting better. He's got a long way to go, but he's got the right attitude."