The Giants have quietly assembled one of their best tight end units in years.

This week I was lucky enough to make it to New York giants training camp in East Rutherford, N.J. While watching the emergence of Rueben Randle, David Wilson, and Prince Amukamara I was drawn to the amount of talent and size our current tight end group has. From individual drills to 7-on-7 and 11-on-11's the tight ends stood out.

It's hard to miss them as they all stand over 6-foot-4 and look to be pushing 270 pounds. The numbers on paper mean nothing until you get up close and personal. All that size wouldn't mean anything unless they had some athletic ability and ball skills, and these guys have them in spades. Their tremendous size and athletic ability have to be making Kevin Gilbride and Eli Manning giddy. 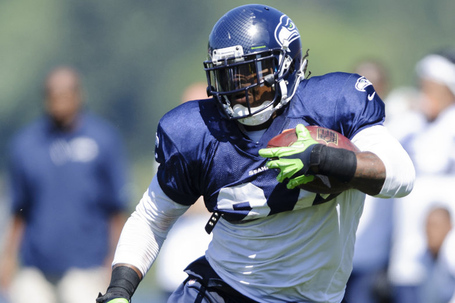 Everything you need to know, every day.

For fantasy purposes I was eager to see if Eli had developed a connection with Brandon Myers. I was pleasantly surprised as they looked to be in total sync on the field. Myers moved well and looked to have a handle on the complicated reads in Gilbride's offense. While I wasn't there for Myers' long practice-ending catch, I was able to see him run precise routes and show excellent hands as he caught everything thrown his way. The amount of opportunities he will have during the season is the only thing keeping him from possible low end TE1 potential.

With the injury to Dennis Pitta in Baltimore Myers has seen his fantasy draft stock bump up a tad. He is consistently drafted as the 13th tight end off the board and would be higher if he wasn't the fourth option in the Giants' offense. The key when drafting your fantasy tight end is if they are at least the second option in an offense. Very rarely do you find a tight end who is the focal point of an offense, a la Antonio Gates of years past, so having a tight end who is second or third in the passing pecking order is key.

A guy who could become a big factor in the Giants passing game down the road is Adrien Robinson. This is a big man, but he moves so well down the field. He flashed excellent hands in drills and was featured on some tight end throwback screens as well as delay releases during 11-on-11 drills. I literally went home from practice on Tuesday and put in a dollar bid in a 32-team dynasty auction on Robinson.

Bear Pascoe has been invaluable to the Giants as he has been a special teams ace, solid tight end, and now is handling the fullback duties with Henry Hynoski sidelined. While Pascoe's roster spot is safe the other tight ends vying for a roster spot in training camp all showed promise. Jamie Childers, Chase Clement and Larry Donnell all looked good at practice and make up a solid group that the Giants can dip into if there are any injuries during camp.

As far as drafting a tight end in fantasy football leagues this year I am going to steal a line from Matthew Berry. "If you're not first, you have to be last." His Ricky Bobbyesque line is in reference to drafting Jimmy Graham as the first tight end off the board or waiting until the very end of drafts to fill that slot. Let other GMs gamble on Rob Gronkowski's health or take Jason Witten and Tony Gonzalez while you build the meat of your team drafting running backs and wide receivers. Drafting Owen Daniels, Jared Cook, or Greg Olsen later in drafts will pay off much more compared to drafting Tony Gonzalez in the fifth or sixth round.

[NOTE: For those who were asking we will have the information next week on this year's BBV Fantasy Football Leagues.]

While preparing for the fantasy competition this year make sure to follow me on Twitter @Coachesser and join me over on Facebook at CoachEsser's Playbook. Also make sure to check out my latest rankings at www.coachesser.com.