Andy Benoit of 'MMQB' has taken an in-depth look at the 2013 Giants. We summarize and, of course, add some of our own thoughts.

Share All sharing options for: MMQB: Defense will determine Giants' fortunes in 2013

'Monday Morning Quarterback' writer Andy Benoit has penned a thorough, exhaustive overview of the New York Giants as the 2013 NFL season approaches. His overall conclusion? That the season will depend mostly on improvement from a defense that was not nearly good enough last season, and for much of the Super Bowl season before that.

This is a well-coached club that has been together for several years. If the defense gets back to par, it will again contend for the division title.

Let's delve a little deeper into some of Benoit's work and see what we agree or disagree with. We'll start with the defense, since Benoit places the onus there for the Giants to return to the playoffs. 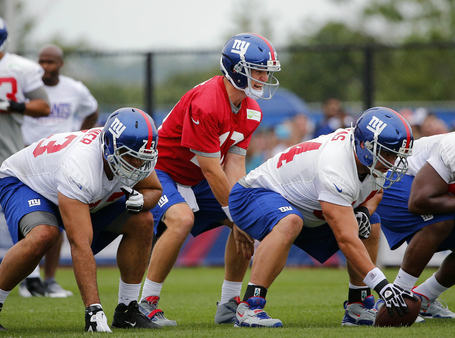 Benoit writes that "The Giants' front four is every bit as significant as its reputation suggests. It is to this defense what neon lights are to Times Square. Which is why it’s critical that this unit bounce back from a sub-par 2012."

He is right, of course, and he goes through the litany of issues. Back surgery for Jason Pierre-Paul, questions about Justin Tuck, the new group of players at defensive tackle.

[Related: Has the defense improved?]

Giants' fans know that Perry Fewell is not Steve Spagnuolo. He relies much less on the blitz and depends on his front four to pressure the quarterback. "With a potent four-man rush, defensive coordinator Perry Fewell can fill his matchup zone coverages with seven players. The extra bodies can create indecision and outright confusion for an offense, particularly if the offense still has to leave extra blocker in against the four rushers," writes Benoit.

Benoit writes that some of the breakdowns in the secondary last season were likely caused by the failure of the pass rush, which is probably correct. A quality pass rush covers a lot of issues in the secondary, and hurrying quarterbacks makes the ball come out quickly and lessens opportunities for big plays.

As for the secondary, Benoit writes that the Giants "desperately need" veteran Corey Webster to rebound from the worst season of his career. He also calls Prince Amukamara "far from a sure thing."

Thus far in training camp we know that Amukamara has been impressive and that the Giants are optimistic they can limit coverage mistakes in 2013.

As for linebackers, Benoit concludes that the group, no matter who plays "won’t be particularly stout against the run."

Not sure I actually agree with that. Mark Herzlich and Dan Connor are probably both better run defenders than Chase Blackburn. The departed Michael Boley was a "chase" linebacker who didn't hold up well at the line of scrimmage. They have to prove it, but some combination of Spencer Paysinger, Jacquian Williams, Aaron Curry and Keith Rivers is likely -- in my mind -- to be better than what the Giants used last season.

I like Benoit's stance on quarterback Eli Manning, who always seem to generate mixed feelings among analysts and fans. Benoit says "Instead of discussing whether Eli Manning is a superstar, let’s discuss why he’s a superstar."

I think Benoit has done as good a job as I've of summarizing what Manning brings to the table. He writes:

Manning’s array of superstar characteristics is unique. His arm strength rarely gets mentioned as among the best in the league, but few quarterbacks can even attempt the type of tight-windowed, timing-based downfield or outside-the-numbers throws that Manning uncorks regularly. There’s also Manning’s pocket presence, which is extraordinary, not so much because of his footwork and mechanics — which, truth be told, can waver at times — but because of his awareness and fortitude. Manning is one of the best in the league at making accurate, strong-armed throws just before getting hit. And he is the best in the league at contorting his body to safely absorb a hit. The only significant demerit for the 32-year-old is his occasional propensity to take reckless chances under duress. He’s too good a game manager for that.

Benoit also -- properly -- credits the fact that Manning has been with Kevin Gilbride his entire career, saying he is "as comfortable in his system as any quarterback in football."

Benoit says that wide receivers Hakeem Nicks and Victor Cruz "both need to be better than they were a year ago. "I'm not going to belabor that point. Benoit's right, and we know that largely Nicks' health was -- and may still be -- the issue there. We also know the Giants are expecting big things from second-year man Rueben Randle.

At tight end, Benoit writes that "the Giants’ system only requires basic role players." He might be right, but Brandon Myers might turn out to be more than that.

Interestingly, when it comes to running backs, Benoit surmises that David Wilson has a style "more conducive to single-back designs, not the traditional interior lead runs that have kept fullback Henry Hynoski prominent."

I'm not sure the Giants agree with that, or that as long as Tom Coughlin and Gilbride are in charge they will ever move entirely away from a traditional power rushing game.