New York Giants linebackers coach Jim Herrmann was asked on Saturday about the competition at the position, where no one has officially been named a starter.

"It’s been fun. It’s been a great competition. The guys, that group in the room, they’re all good guys," Herrmann said. "They all understand they’re competing, but they’re also trying to help each other get better. As a coach, I can’t ask for anything more from them."

Parcells Inducted Into Hall of Fame 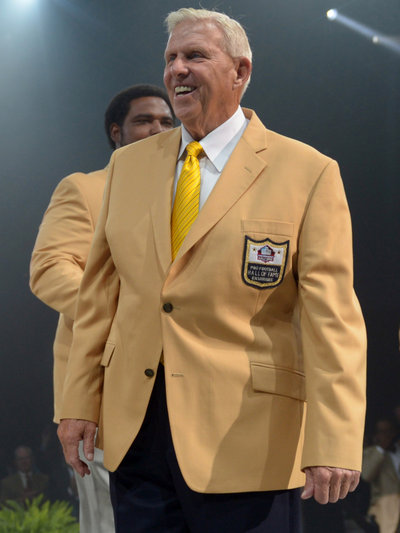 Our coverage of Bill Parcells' induction.

Antrel Rolle has been forced to play out of position the past couple of seasons, filling the slot corner role rather than the true safety role the Giants signed him for. That hasn't been the case so far this season.

"Antrel has gotten beaten up over the past couple of years playing the nickel position," Merritt said. "By him being able to play the safety position for us now is a tremendous lift in his spirit because now he can play the half, he can play the third, he can play quarters, he can rotate down in the box and he doesn’t necessarily have to rotate out on the receiver and go out and play man to man."

Merritt said Rolle added weight and is up to about 208 pounds, rather than the 200 pounds he weighed trying to play slot corner.

Since Jeremy Shockey was traded away the Giants have gotten solid play from a number of unheralded, and sometimes undrafted, tight ends. Tight ends coach Michael Pope, known as one of the best teachers of the position in the business, says the salary cap forces it to be that way.

"It is a position that, because of the salary cap, that only very few persons get a high percentage of that salary cap. It’s a developmental position," Pope said.

"It’s important that you do get guys that are the right kind of guys that have the size and at least a high-end amount of talent. They don’t have to be superstars, because you’d be paying them high if they were. But you develop them and make them very good contributors to your football team. Generally these are the guys that are not prima-donnas. Every day is a "prove it" day for them."

Path to N.F.L. Winds Through Rink for Giants’ Rookie Running Back - NYTimes.com

Justin Tuck is re-energized after two down seasons