Follow this thread for all the information on Giants' roster moves Saturday.

Matt Broha is hitting the waiver wire. Should be a fun day tomorrow. #WhereIsHeGoing

The New York Giants, and all NFL teams, have to be down to the regular-season 53-man roster limit by 6 p.m. ET Saturday. That makes today a nervous one for players on the roster bubble, and a brutally difficult one for Giants' decision-makers.

The Giants have hard choices to make at several positions. Those include running back, quarterback, defensive end and tackle, cornerback and safety. 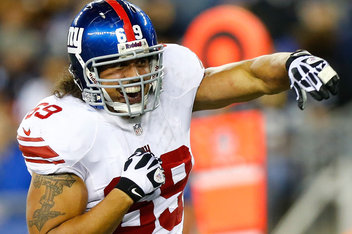 Ed's prediction on what the final 53-man roster will look like.

From that group alone, it is obvious the Giants will be turning loose a good deal of NFL-caliber talent for other teams to snap up.

There are always a couple of unforeseen surprise roster moves. Who will be a surprise cut? Which player will unexpectedly make the roster?

Use this thread to follow and discuss all the roster moves. Follow cuts across the league at SB Nation's NFL Roster Cuts Hub Page.