Share All sharing options for: With Andre Brown, Tyler Sash injured, which free agents are available?

The injuries continue to pile up for the New York Giants, who last night lost running back Andre Brown and Tyler Sash in the preseason finale against the New England Patriots.

Brown suffered a second broken leg in as many seasons, though it is not believed to be as severe as last season's.

Brown, who was expected to split carries with starter David Wilson, has a "small fracture" in his left leg, according to coach Tom Coughlin, and Brown expects to be on the field at some point this season.

A fracture typically takes between four and six weeks to heal, and Brown is a candidate for the IR/designated for return list, as he is ineligible to open the reason on reserve/PUP.

Brown remains on Big Blue View's 53-man roster projection, along with Da'Rel Scott and Michael Cox. But, could the Giants look to the free-agent market for added depth?

On the waiver wire is a familiar face in Brandon Jacobs, as well as former practice squad player Ryan Grant, Michael Turner, Willis McGahee and Tim Hightower, who the team showed interest in earlier this offseason. 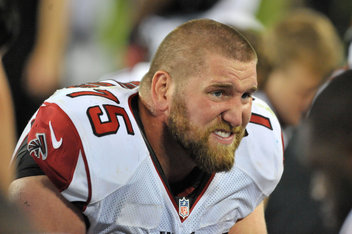 McGahee is coming off of 731-yard season with the Denver Broncos and is just a year removed from a 1,200-yard campaign. Similarly, Turner rushed for 800 yards and 10 touchdowns with the Atlanta Falcons last season.

While both McGahee and Turner are a little bit older in the tooth, younger options like D.J. Ware, Joe McKnight and Beanie Wells are also available.

The Giants may also be interested in exploring which safeties are on the market. Against New England, Sash suffered a concussion, just days removed from a season-ending injury to starter Stevie Brown.

Big Blue View projects Sash to survive roster cuts, but perhaps the team is looking for another option. Among the free agents available is a familiar face in Kenny Phillips, who was released by the Philadelphia Eagles, as well as Tom Zbikowski, Kerry Rhodes, Quintin Mikell, Atari Bigby, Jordan Babineaux and Madieu Williams.

Phillips is an obvious choice, as Perry Fewell knows the former first-rounder. Rhodes and Mikell have been rumored to sign with teams, though nothing has transpired. Each would bring a veteran presence to the Giants secondary so Sash does not have to rush back from his concussion.