NFL Hall of Fame 2013: Bill Parcells to be inducted

Former New York Giants coach Bill Parcells will be among the inductees into the Pro Football Hall of Fame Saturday evening.

Share All sharing options for: NFL Hall of Fame 2013: Bill Parcells to be inducted

Bill Parcells, who coached the New York Giants to Super Bowl victories in 1986 and 1990, will headline the Class of 2013 that will be inducted into the Pro Football Hall of Fame in Canton, Ohio Saturday evening.

The honor comes a year later than Parcells should have entered the Hall, but is still well-deserved. He is the only coach in NFL history to take four different teams to the playoffs.

Coverage of the ceremony, which begins at 7 p.m. ET, will be on NFL Network and ESPN2. 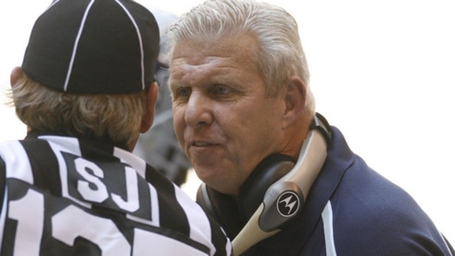 Complete coverage of the Hall of Fame induction ceremony from SB Nation.

Parcells, throughout his vagabond career, was known for his ability to motivate players.

"It’s a good thing he stayed. It’s a good thing they kept him. That’s what I say. He’s a great coach," said current Giants coach Tom Coughlin, who will leave training camp Saturday afternoon to attend the induction ceremony.

Use this an open thread to discuss your memories of Parcells days with the Giants.

Gosselin: As Bill Parcells heads to Hall of Fame, his best work might have been with the Cowboys | Dallasnews.com - News for Dallas, Texas - SportsDayDFW

Bill Parcells humbled as he reflects on Hall of Fame career