The incredible NFL odyssey of Terrell Sinkfield has landed him with the New York Giants. The Giants Tuesday signed Sinkfield, a rookie free agent wide receiver from Northern Iowa, to a contract.

The Giants have had a rash of injuries at wide receiver, with Victor Cruz out until at least the regular season opener with a heel contusion, and both Ramses Barden (knee) and Louis Murphy (leg) not practicing. The Giants waived/injured wide receiver Keith Carlos earlier in the week.

What do I mean by "odyssey" in reference to Sinkfield? Giants.com explains:

Sinkfield, 6-foot-1, 196 pounds, caught 43 passes for 499 yards as a senior at Northern Iowa. Since the beginning of training camp the Giants have now added three receivers who were not with them when camp started. The others are Julian Talley and Marcus Harris 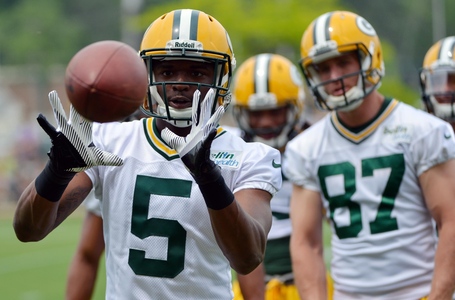 When Antrel Rolle shed his walking boot less than two days after spraining his ankle, he famously said "the boot is for wimps." Well, with star wide receiver Victor Cruz now wearing a walking boot to help his heel contusion, rolle has changed his tune.

"What theory, that boots are for wimps? Nah man. I want him to be in that boot. We need to make sure we take care of Victor. I think we all know what he means to this team so if he has to walk around in a boot for a month, so be it," Rolle said. "Maybe I’ll put a boot on with him to just show him that I’m with him."

Rolle also updated his own status on Wednesday, saying he is making "excellent" progress.

"I love playing this game. I just like being out here competing against each other and stuff like that and making each other better. I feel very thankful and blessed that I’m able to still come out," he said.

The Giants' official defensive depth chart now lists Dan Connor as the starting middle linebacker. Connor's ascension over Mark Herzlich is something we talked about previously.

Guy, Humphrey are Seniors Committee HoF candidates | ProFootballTalk
One of the more controversial candidates for selection to the Pro Football Hall of Fame is getting another chance. Via Rick Gosselin of the Dallas Morning News, former Raiders punter Ray Guy and former Falcons defensive end Claude Humphrey have been named as the two Seniors Committee nominees.