When J.B. Gilpin and the guys at Razzball were looking for the best source possible to answer some burning questions about the New York Giants and their fantasy football outlook heading into the 2013 season they turned to Big Blue View and your resident fantasy football expert. I was glad to answer their questions using all of the information we at Big Blue View have gathered this offseason, and while the interview was conducted in July almost all of the answers still ring true. While I answered questions about many of the current New York Giants I wanted to highlight one particular question about whether or not the Giants offense could support 3 fantasy relevant wide receivers this season. The full interview can be seen here at Razzball.

Razzball: We’ve seen the Giants passing attack support three WRs in year’s past, with Rueben Randle getting some preseason hype. Louis Murphy and Ramses Barden (who had the big breakout game in week 3 last year and reminded me of the Eli/Plaxico connection) are also a little interesting as guys to keep on the radar. Do you see a fantasy-relevant WR3 emerge this year?

Dennis: I don’t see Barden being a fantasy option this year unless there are major injury problems for the Giants. I love that Randle got all the first team reps during OTAs as Nicks and Cruz were no shows. The talk was that he looked lightyears ahead of last offseason and Kevin Gilbride even spoke about him seeing the field a lot. I really like Randle’s athleticism and if he improved his route-running and coverage reads on option routes as has been intimated then he could be a very nice flex option in fantasy football this year. His leaping ability and knack for making big catches could see him getting some red zone targets. Murphy is the type of outside receiver the Giants needed as another option. Eli works the numbers as well as any quarterback in the league and Murphy is very adept at working that area. If there is an injury to Nicks or Randle, Murphy should be on the fantasy radar."

I wrote this response almost a full month ago, but feel like the fantasy world is just latching on to the idea that the Giants will indeed feature three excellent fantasy wide receivers this season. Rueben Randle only touched the ball once in the Giants first preseason game, but managed to make people sit up and take notice with his electrifying 18 yard reception. Randle's near miss on a long pass attempt from Eli was just another prime example of how the Giants are going to use this emerging chess piece.

While participating in many expert mock drafts this summer I have seen Randle's draft stock rise steadily through out the off season. There was a time early in the summer where Randle would come off the board after the 13th round as a wide receiver 6 in 12 team leagues and now he is going off the boards in the 10th round as a wide receiver 4. His WR ranking has gone from the mid 50s to the low 40s just on training camp news and one catch in the preseason. His value is even higher in best ball formats where his big play ability can see him help teams from week to week with out hurting them when the Giants choose to feature a different receiver against a certain defensive look. His overall numbers won't be all that impressive as he is the Giants' third receiving option, but a stat line of 40-50 receptions, 800-900 yards, and 6-8 touchdowns could be a very nice flex option.

His ADP is clearly going up as you can see from this chart generated at http://fantasyfootballcalculator.com 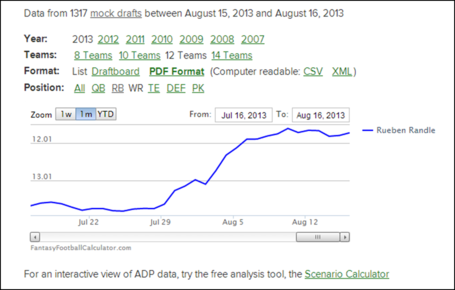 You can read the full interview here at www.razzball.com to see what the fantasy football world wants to know about our New York Giants.