In a pivotal matchup between the New York Giants and the Atlanta Falcons, an early turnover proved to be the proverbial back-breaker for the Giants. Big Blue View's Uptown Murf takes a look at what truly went wrong for the Giants in this game. We've dubbed this series: "Failure to Launch" and it might even help us learn some things about the 2013 Giants.

Often times in the NFL a single play can be the turning point to a game. With only so many plays available to be made in the allotted 60 minutes, a contest can truly be a game of inches. In this series we spotlight single plays that may have had the most dramatic effect on any single game. We call it....Failure to launch! 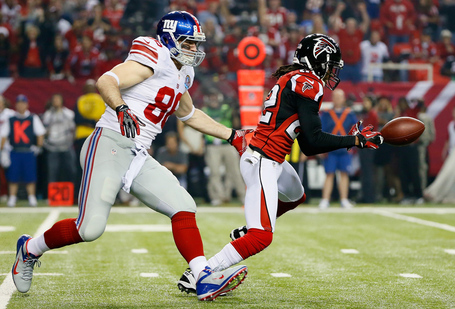 Prior to the 2012 Week 15 match-up between the New York Giants and the Atlanta Falcons, most pundits believed that Giants would go into Atlanta and take care of business on their way to sealing up the NFC East crown. Many, including myself, thought that the Giants ability to rush the passer would be too much for the Falcons - in turn, dampening the effect of the Falcons' high-powered air attack, while allowing the Giants own aerial artistry to have it's way. Boy, were we all wrong!

To go forward I believe we must take a step back for a second.

Going into the wild-card round of the 2011 playoffs, those same aforementioned pundits, including myself, believed that the struggling Giants defense would wilt under the pressure of the Falcons explosive yet balanced offensive assault. Boy, were we all wrong! What ensued was a brilliant display of stifling defense in the form of pressure from the Giants defensive front, and an equally proficient play from the secondary.

What once looked like the new 'Greatest show on turf', could only resemble one of those low-budget carnival shows my mother took me to as a kid somewhere off a side block in downtown Atlanta (Geez thanks mom!). Unable to muster a touchdown on offense, Atlanta's season would fizzle out with a 24-2 loss in embarrassing fashion at MetLife Stadium.

Looking back, I remember thinking the degree of difficulty of the Giants coming into the Georgia Dome and knocking off the first-place Falcons turning up quite a few notches. The late-week scratch of Ahmad Bradshaw would prove to be problematic in a myriad of ways.

Often times on offense Bradshaw's no-nonsense approach would be an elixir for the offense when met with adversity. The vet would even go so far as to physically reprimand a player he felt needed to step up (as Victor Cruz found out the hard way). There was a big void without his presence, and it was felt right away.

Here we have the "All 22" view of the play where I believe the game was lost for the Giants. I think this play highlights the importance of a tone-setter like Bradshaw. On the second play from scrimmage with the Giants in 'Ace' personnel (1RB, 2TE, 2WR), and the Falcons in a Cover 4 zone defense (with a blitzing OLB in Sean Weatherspoon), the Giants attempt to attack the void in the zone.

I think this is a poorly designed play by one of the best offensive minds in football in Giants offensive coordinator Kevin Gilbride.

There are four receiving threats in this play as noted by the personnel grouping. Tights ends Bear Pascoe and Martellus Bennett are grouped together (with Pascoe being slightly split off). Bennett attacks the seam, with Pascoe running a crossing route. Cruz is in the slot running a seam route as well. It looks as though primary receiver (Z), Hakeem Nicks is running a comeback route meant to settle in the void of the zone.

Because of the jam implemented on Bennett at the snap, Eli only has Cruz or Nicks to look towards as the play develops.

In zone coverage the defenders are playing forward. Meaning they don't necessarily have to take their eyes off the quarterback right away. In man coverage you have to keep your eyes on the receiving threat in front of you. So with the Falcons running zone, Asante Samuel, probably the best zone corner in the league, gets to see this play develop from a nice vantage point.

Here's where not having Bradshaw came into play. Rookie running back David Wilson's only assignment in this play is to pick up the blitz. First of all his technique is off as he's letting Weatherspoon attack him while he waits. He needs to be leaning forward and seeking the collision. Bradshaw is the best in the league at picking up the blitz. He takes pride in it, and attacks the defender with ferocity.

In addition, Pascoe is just now sifting his way through traffic and quarterback Eli Manning is just now hitting the finality of his drop back.

As we can see, Wilson gets bull-rushed and knocked off his feet, in the process hurrying the throw from Manning. The offensive line actually has a really solid pocket for Manning, who is not able to utilize it due to Weatherspoon bearing down on him. In a perfect world, Wilson would have stoned the blitz allowing for Manning to reset and step back up into the pocket. Then he would've more than likely gotten the ball to Pascoe coming across the formation. Instead, Manning hurries the throw while using poor mechanics in throwing off balance using mostly his arm.

Samuel sees this the whole time and breaks on the ball before Nicks has a chance to whip his head around. For this to work, Manning would've needed to drill this with maximum velocity. Additionally, we see that Cruz has yet to really get his seam route in motion. Eli truly has nowhere to go here - but to Nicks.

Even with all the negative factors unfolding in the play, Nicks could help his QB out by snapping his route off and working his way back towards the ball - shielding Samuel away from the ball.

Nicks doesn't seem to attack the ball with the ferocity he's known for, making you wonder if his lingering knee issue impacted the play. The combination of him not coming back towards the pass and Eli not putting that 'Eli' zip on the throw, makes this a pretty easy play for Samuel. Against zone coverage, the idea on this route would be to position yourself between the ball and the corner - essentially boxing him out (to use a hoops reference). Therefore more times than not you'd draw a pass interference call or make the completion.

And there you have it. A turnover inside Falcons territory, that leads to an easy score. Not only do the Falcons have one of the best home records in the NFL the past six seasons, they haven't lost more than two games when they score first. The final outcome of this one would not deviate from the norm.

In a pivotal match-up of first place teams in their respective divisions, the Falcons put up an offensive and defensive clinic on the Giants. This early turnover led to a quick score that put the Giants behind the eight-ball so to speak. The Falcons are hard enough to beat at home, but giving them a gift turnover that could've been avoided with sound mechanics makes it worse.

The Falcons would go on to win in a route by a puzzling score of 34-0. Atlanta rendered one of the most explosive offenses in the league helpless, while seemingly having its way with the Giants defense in the process.

The momentum carried over from this early turnover, resulting in Manning going only 13-for-25 for 161 yards, with 2 interceptions and no TDs. Just one week prior, he threw 4 TDs in a 52-27 route of the equally explosive New Orleans Saints!

Coming into a game where the Giants were 8-5 and looking to separate themselves from the rest of the contenders in their division, the loss sent them back to the pack - where a subsequent loss to a reeling Baltimore Ravens team effectively took the Giants destiny out of their own hands - all but killing their hopes at making it to the playoffs.

And as we all know, the Giants just merely have to make the playoffs and they have to be considered a prime threat at winning it all. Looking forward to 2013, a healthy Nicks should position himself once again as a top 5 receiver, while David Wilson should have the necessary experience to step into the Bradshaw role in more ways than just running the ball. And Eli? Well, Eli will continue to be Eli! A quarterback unafraid to take shots consistently down-field in hopes of taking the top off the defense, and creating splash plays that demoralize the opposition. This goes to show that not mentioning the Giants among the upper-echelon of the NFC might be as fallacious as it gets. The Giants were as close as anyone to making the playoffs, and had wins over a few playoff teams to boot (i.e. San Francisco, Washington, and Green Bay). 2013 may well be their year.

But unfortunately looking back, this game by the Giants offense was truly a failure to launch!