Rookie defensive end Damontre Moore is next up as we continue breaking down the Giants' 90-man roster.

Damontre Moore was drafted in the third round of the 2013 NFL Draft by the New York Giants with the hopes that he would become their next dominant pass-rushing defensive end. As we continue our player-by-player breakdown of the 90-man roster the Giants will bring to training camp later this month let's look at what sort of impact Moore might be able to have as a rookie. 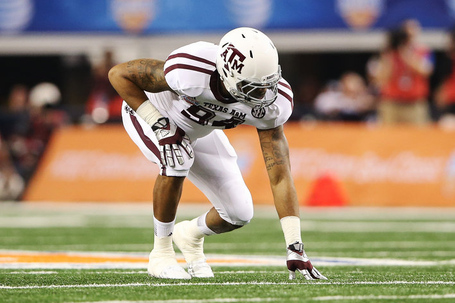 Moore was a consensus All-American after a dominant season at Texas A&M, where he compiled 85 tackles (21 for loss) and 12.5 sacks. He finished three seasons at Texas A&M with 26.5 sacks in 38 games.

How quickly Moore, who turns 21 in September, receives significant playing time or makes a real impact is anyone's guess. With Jason Pierre-Paul recovering from back surgery and questions about the potential impact of Justin Tuck and Mathias Kiwanuka, however, there is an opportunity for Moore. At 6-foot-5, 250 pounds it is unlikely Moore can be an every-down player who can hold up vs. the run at this point, but the Giants will hope that their youngest player develops quickly enough to make an impact as a pass rusher.

To help you set expectations, here are some quick rookie numbers on Giants' defensive ends:

The Giants, of course, will hope for JPP/Kiwanuka type rookie production from Moore.