Prince Amukamara says he wants to be the best corner in the NFL. Which In turn places lofty expectations upon himself. We hit the film room to truly see if he has what it takes to meet those expectations. All aboard for Uptown's film school.

Share All sharing options for: New York Giants' Prince Amukamara ... Heir to the throne in 2013?

For New York Giants cornerback Prince Amukamara, the 2013 season is a bit of a show and prove year. Inconsistencies in his play, and frequent trips to the training room have marred the beginning of what some once predicted would be a multiple time all-pro career. The Giants are reliant upon Amukamara's progression to return to the seemingly inimitable defense they once were. We hit Uptown's film school to truly see if Prince has what it takes to be the heir apparent.

If most scouts were able to construct the perfect cornerback, the prototype could certainly resemble Amukamara. At 6-foot, 207 pounds Amukamara might be the perfect blend of height, weight, and speed. His 4.4 in 40-yard dash only serves to further illustrate that point. A first-round selection in the 2011 draft, Amukamara is a precise blend of physicality and polished technique. 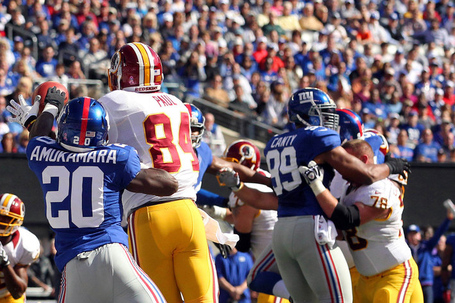 Can Prince Amukamara make the leap from good NFL cornerback to game-changing shut down corner?

I first saw Prince play his sophomore year at Nebraska circa 2008. He was extremely raw, and full of untapped potential as a cornerback prospect. One full season under acclaimed coach Bo Pelini changed the fortune of Prince for the better.

The 2009 season marked the coming out party for Prince and the rest of the Nebraska Cornhuskers. Led by all-world defensive tackle, Ndamukong Suh, the Cornhuskers rode the back of a stifling defense all the way to an appearance in the Big 12 championship game. With the pressure the Cornhuskers were able to generate from the front seven, Amukamara benefitted in a major way. His 64 tackles, five interceptions, 11 passes defensed and two sacks notched him a first-team All-Big 12 selection. The following season, despite not recording an interception, Amukamara was selected as the Big 12's defensive player of the year. It was pretty much a foregone conclusion that Prince would be a very high selection in the 2011 draft.

Amukamara's pro career got off to an extremely slow start. Part of the rookie class that didn't have a true offseason due to the NFL's lockout, Amukamara was hurt on the first day of training camp - and never seemed to truly get on track. Despite the setbacks, Amukamara's talent was clearly evident as he showed flashes of what made him a first-round draft pick. Playing in only seven games, most considered Prince's first season a wash. Fortunately, Prince didn't need to be a knight in shining armor as the 2011 Giants found their groove in the playoffs, and rode that magic all the way to a Super Bowl victory!

More: Ed discusses Amukamara, more Giants on the 'Sports Buffet' on 1300 The Zone in Austin, Tx.

Prior to the 2012 season, the buzz was once again evident. The Giants would continue that magic on the strength of a great pass rush, and possibly exceedingly great play in the secondary. The buzz quickly dissipated as the Giants were horrendous across the board defensively, and to a certain extent on the offensive side of the ball. Individually, Prince's season was a microcosm of the Giants season as whole. A myriad of injuries (ankle and hamstring) once again slowed his progress while limiting him to 13 games. His 53 tackles, one interception, and seven passes defensed were extremely disappointing in itself, but may not have been the worst part of the season for Prince.

A bizarre hazing video featuring Amukamara getting thrown in a cold tub by various members of the Giants defense, most notably star end Jason Pierre-Paul, was released much to the chagrin of the Giants brass. It was reported that the hazing in the video was due to the Giants veterans attempting to 'toughen up' the second-year corner. Something I'm convinced goes beyond football.

Prince Amukamara is one of the friendliest, low-key players you could ever meet in the NFL. His calm and somewhat pensive demeanor, can be mistaken for weakness off the field, but his on-field technique is anything of the such. He seems to be carrying a bit of a Dr. Jekyll and Mr. Hyde persona. On the field, there's not too many corners who use an authentic and physical press technique like Amukamara. Let's have a look at the film to further illustrate:

Here we have Prince in man coverage against the 49ers Mario Manningham, who's running an out pattern. Prince is in perfect position to get the press. His feet are balanced and his lean is just slight enough.

Here we have something that's pretty unique to Prince. Instead on the normal outside shoulder press, Prince will use two hands similar to a defensive lineman two-gapping on his way to make a tackle. He does it right at the line of scrimmage and very quickly. This can most certainly throw off the timing of a route.

Prince makes use of the mirror technique. His goal is stay in the hip-pocket of the receiver to stay within range - to make a play on the ball.

Notice how Prince keeps his hands extremely active. He's figured out how to touch the receivers without impeding their progress. Once the receiver looks, Amukamara does as well.

For a bigger corner, Prince has excellent agility which aids in his change of direction. It's hard to point out a weakness of his when it comes to his physical attributes.

Combining impeccable technique on this play, with supreme intangibles Amukamara puts himself in excellent position to make a play.

Ahead of the 2013 season, Amukamara has stated that he wants to be the best corner in the league. That title is currently held by Darrelle Revis of the Tampa Bay Buccaneers. What makes Revis special is his ability to be great in all aspects of playing corner. Whether it's playing press technique in man coverage, or playing off in zone principles Revis truly has no weakness. In addition, the physicality with which he plays may be only superseded by his mental makeup.

For Prince to take the next step in his development he needs repetition. The more football he plays the better he will get in all facets of his game. He has a similar makeup to Revis, and possesses a lot of the same physical traits. With a career totaling 20 games, Amukamara doesn't have a big enough sample size to get a read on how his game will progress.

What I do know is that Amukamara plays best in the short game. He's great in that aspect because of the physical nature with which he attacks the receiver at the line of scrimmage. He has excellent ball skills, and is a solid tackler in space. I find him to be reliable when playing the ball down field in zone concepts as well. Let's have a look at the film.

Here we have Amukamara playing zone. Zone concepts are a lot different because you're playing facing the QB, and only have a split second to react to the receivers route. You must trust your eyes, and stick that foot in the ground when attempting to make a play on the ball.

Amukamara is doing a good job of reading the QB's eyes. He's essentially playing safety in this scheme. A position I could easily see Amukamara transitioning to in an attempt to extend his career after he loses a step in his athleticism.

Once you read the play in zone, you have to stick your foot in the ground and go! Prince is doing just that here.

This is excellent technique in breaking up the pass. He uses his inside hand so he doesn't have to go across the body of the receiver to make the play. Where most corners might get a pass interference call, Prince avoids this using sound technique.

As we can see, even on plays downfield Prince has what it takes to get the job done. To be better than Revis he will need to display this on a week-to-week basis. It's hard to really pinpoint the deficiencies in Prince's game. That's something I remember saying about Revis early on his career.

Back to where I think he already excels. A receiver like the Eagles Jeremy Maclin is a tough cover. He's quick off the ball and a very crafty route runner. Let's see how Amukamara does in press against him.

Amukamara gets his patented two-hand press on Maclin at the top of his route. Maclin is actually running a comeback route with a hitch. A bit of a double move. As we know, Prince wants to mirror him the whole way through.

The strength of the press throws Maclin off his route.

Prince has the quickness the match Maclin's acceleration. He's on top of the route in case it is going deep.

Once Maclin sticks his foot in the ground, Prince mirrors it.

The tight coverage forces an errant pass to avoid an interception. Prince is right there, despite the tough cover. In 2013, I think we should get used to Prince being right there.

I believe this is the year Prince Amukamara puts it all together and gains recognition as one of the best corners in the game. He has every tool necessary, and his team as whole should be a lot better. His overall combination of size, speed, agility, and quickness puts him in the upper-echelon of corners from a physical standpoint. His mental acumen and solid technique may be the intangibles that push him to the top of the NFL's pantheon. I surmise that Amukamara is most certainly the heir to the throne ...

[EDITOR'S NOTE: 'UptownMurf' is the newest contributor to Big Blue View. He is a film junkie, among many other things, and will bring a passion for breaking Xs and Os to BBV. 'Murf' will, for now, probably bring us one lengthy film breakdown each week. You can also see his work at NFLs Future and Canal Street Chronicles.]