What's better than fireworks and barbecues on the 4th of July? A fantasy football mock draft on July 1st, of course!

The first of July seemed like the best time to start setting my preseason rankings and dipping my toes in the mock draft waters. The best part is I could do this with my toes literally in the water. Sitting at the beach with an I-Pad in hand, soaking in both the sun and fantasy football knowledge.

With OTA's over and minicamps in the books a discerning eye can see which players are going to win the battles for playing time, and which players to avoid. Now is the perfect time to set a base as far as value on a fantasy player. Some players will be more difficult to gauge than others this early in the summer. For example, Robert Griffin III will be studied like a hawk in the preseason to see if he is still the run threat he was coming into the league after his knee injury last season. Colin Kaepernick's chemistry with his receivers in the absence of his favorite target Michael Crabtree will be looked at under magnifying glass. The running back battles, like the one in St. Louis, will be watched by fantasy football players as intently as a teenager checking their friend's Facebook statuses.

I was lucky enough to be invited to participate in Draftmasters 102 on www.myfantasyleague.com and could not wait to test my early summer rankings. The mock draft I will be recapping below is a PPR league with QB-RB-RB-WR-WR-FLX-TE-K-D/ST set up. With a PPR mock draft keep in mind that catches are worth .5 points and all other scoring is traditional.

David Wilson Not a Fantasy Secret 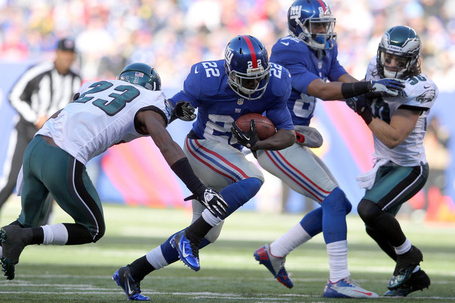 David Wilson has seen his average draft position leap over the last month.

No surprise with the first pick in the draft as AP is taken 1st overall almost across the board in all standard and PPR leagues. He is due for a little regression from last year, but from Superman to everyday super running back is okay in my book.

Doug Martin has been moving up to the second spot on a lot of people's boards mostly on the fact that Foster's YPC have gone down over the last two years and Fosters injury concerns. Martin is a stud who has been going first overall in many keeper and dynasty leagues.

Jamaal Charles is a rollercoaster ride many pundits are currently buying tickets for. Andy Reid's use of the RB in his offensive system is what is driving up Charles's draft stock early on. I wouldn't take him over Foster, but I can see why some might.

Arian Foster has slid because of a preseason injury and his slightly declining numbers in 2012. I still feel that he is in his prime and is a weapon both in the run game as well as the pass game and I wouldn't let him slide past the three spot in most leagues.

Ray Rice was a PPR beast the last few years and normally I wouldn't be able to draft him at 5.01, but with the emergence of Bernard Pierce many GMs are beginning to sour on him. I am not one of those GMs. Yes Pierce will see the field more, but a fresh Ray Rice is a PPR league stud. One of the safest picks possible in this slot.

C. J. Spiller showed his immense talents last year, but Buffalo is again in rebuilding mode and currently has Kevin Kolb atop their QB depth chart. The presence of Kolb and the fact that E. J. Manuel may take over at some point makes me push Spiller just a bit down my PPR rankings.

LeSean McCoy was tremendous under Andy Reid and his stock is in flux as we wait to see exactly what Chip Kelly's NFL offense will look like. Will McCoy be running and catching the ball as much as he did the last few seasons, or will he be on the sidelines a lot as Kelly's offense proves Not ready For the League?

Marshawn Lynch is a stud who is always undervalued during drafts. Everyone is always ready to draft someone with a bigger upside than ride Beast Mode to a fantasy championship. He gets enough catches to still be a solid PPR back.

Where Calvin Johnson goes is always the key to any PPR first round. His value is first-round worthy, but it has to be at the right spot. You have to know you can come back with a solid RB in round two if you take him over some good RB talent. Here was a good spot as the team owner here will only have to dodge six picks before he gets to take a RB.

Trent Richardson is the one guy left on the board I would have taken over Johnson at 9. Getting him at 10 is a tremendous value. He could play his way into top 5 status if his body allows him to. The nagging injuries are the only things holding him back from being a top 3 pick.

Matt Forte is a solid PPR league RB1 who comes with one disclaimer "Can't score at the goal line!" If he could just be decent from the one-yard line he would be much higher up the rankings.

RotoRankings took a big gamble and went with the clear cut best tight end in fantasy football. Jimmy Graham is so far above all the other tight ends available that this could work out if he is able to get some RBs late.

Surprisingly RotoRankings again bucked the norm and went WR after taking a TE in the first round. While Brandon Marshall is a PPR beast, taking a receiver instead of an RB could prove costly. After the pick he admitted that he was tempted to take Darren Sproles with this pick, but decided to gamble.

Adam Ronis of RotoExperts and SiriusXM Radio decided to go RB RB in the first two rounds and wait on receiver. At this spot in a PPR draft it can be a very solid strategy.

SundaysRule got the second best receiver on my board in A. J. Green to pair with Trent Richardson. A very solid start to the draft.

Darren Sproles is a PPR stud and his draft stock is vastly different in standard leagues compared to PPR leagues. I still feel this is a little early for him, but this is right around where he goes.

Alfred Morris is not your ideal PPR back as he is mainly a runner and not used in the passing game that much. Having Lynch already on my squad I may have gone WR here.

Chris Johnson was such a huge disappointment last season that talking about him gives me heart burn. Nevertheless, the Titans have revamped their O-line, gotten rid of Chris Palmer and he could bounce back. Key word is "could".

Dez Bryant has been flying up draft boards lately as it really looks like he has gotten his act together. His performance down the stretch last year coupled with his name being out of the news has him in a virtual tie for me with A.J. Green. Great value this late in the second round.

I was hoping Bryant would fall one more slot, but Demaryius Thomas is not a bad fall-back. From this draft position with the depth at QB I like to go RB-WR if I can. I always adjust if the draft goes out of whack, but this draft has fallen as expected. I was tempted to go with David Wilson here, but Thomas was higher on my board. If Graham had somehow fallen to this spot he would have been a no-brainer.

Larry Fitzgerald was the next WR on my board and I love his prospects heading into 2013. @Chet_G recently tweeted that Fitzgerald was only credited with receiving two catchable balls over 20 yards last season. TWO! With Palmer under center Fitzgerald should be a PPR stud once again.

Julio Jones suffers in value because of Roddy White lining up on the other side of the field. Jones has tremendous talent, but there is only one football to go around so his potential is always capped a little by the other weapons in the Falcons' offense.

David Wilson was drafted before MJD, Frank Gore, Darren McFadden, and Ryan Mathews. He was drafted as much on his own potential as the other's perceived flaws. I have seen Wilson going higher, in fact as high as 13th over all in an expert's mock draft, but for now this is a solid spot to draft him.

Maurice Jones-Drew's foot as well Jacksonville's QB position make drafting him a gamble. You could be getting a great back at the end of his prime years or you could get an injured version of the old MJD who is forced to watch from the sideline as Blaine Gabbert and Chad Henne do their best impressions of a terrible starting NFL quarterback.
Here is a Fantasy Football video from SB Nation Studios.
Next week I will cover rounds 3-8 only touching on the most intriguing picks as well as taking a look at where our New York Giants are taken. Please feel free to join the fantasy football conversation on Twitter @coachesser and visit me on Facebook at CoachEsser's Playbook, or at my website www.coachesser.com for all my latest fantasy rankings.