King Tuck: Justin Tuck rises from the ashes in 2013

Much like Gotham City's Bruce Wayne, the sentiment around the league is that Giants end Justin Tuck is no longer a factor as a superstar. I'll show you why, similar to 'Batman', Tuck has a skill-set that supersedes the stat sheet.

Share All sharing options for: King Tuck: Justin Tuck rises from the ashes in 2013

A lot has been bandied about in regard to the play of New York Giants defensive end Justin Tuck. The consensus around league circles is that he's washed up, and should either be benched or cut. Giants fans are at an impasse, wondering what has happened to their once fearless leader. I say it's time to readjust that camera lens. King Tuck hasn't gone anywhere. 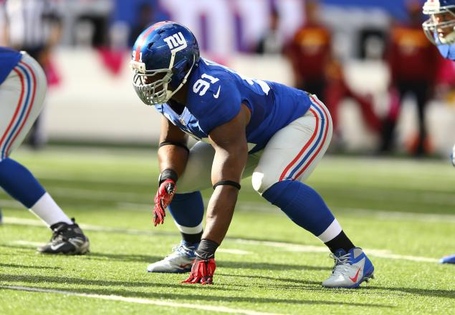 Let's face it, Giants fans have pretty high standards when it comes to defensive line play by way of quarterback disruptions. When you can read off names like Lawrence Taylor, Michael Strahan, Osi Umenyiora, Justin Tuck, and Jason Pierre-Paul you absolutely have the right to. The fact that most of these name ran concurrent to each other makes it that much more special. The bevy of riches when it comes to pass rushers is so plentiful in New York City that I believe the fans have become, how should I put it? Umm, spoiled?!

When you can have multiple rushers with eight or more sacks at a time, can win a few Super Bowls, while harassing quarterbacks and hitting them so hard their feet lift off the ground (poor Tom Brady), being easily soured tends to come with the territory. 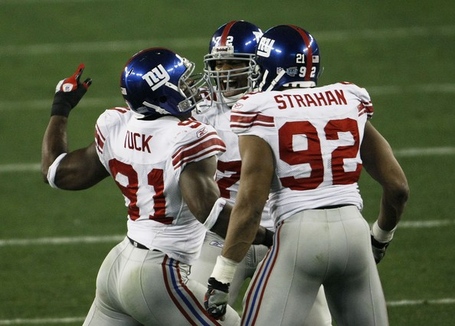 Put yourself in my shoes. As a native Atlantan I can really only stake claim to one great pass rusher over the past decade or so. Former Falcons end John Abraham seems like he was plucked right out of New York's fold. Well, technically he was as the Falcons got him from the cross-locker room rival New York Jets. Which really speaks to what New York has seen as a whole! His timely qb pressures, sacks, and strip fumbles were like money. No matter when you got it, it always seemed to come on time.

But when you lay your claim to one pass rusher, that means the rest of the guys had to be painted with a broader brush. Looking at exclusively disrupting the passer as a measurement or effectiveness was not fair...But it can be a circus! (haha, I crack myself up) I believe the effectiveness of New York's perceived fallen hero Justin Tuck is a fallacy. What Tuck brings to the field goes way beyond sacks, and I'll tell you how.

Tuck's career got off to a bit of a slow start. In his first two years ('05-'06), he appeared in only 20 games mostly due to a combination of injuries and a stacked depth chart. His breakout season in 2007 coincided with the Giants magical Super Bowl run centered around a very hot defense. Specifically the defensive line. Former Giants defensive coordinator Steve Spagnuolo had the ingenuity to work all three of his star ends into packages all at once. A 36-year-old Strahan combined superior technique, with a vast array pass-rush skills to earn himself nine sacks. Pro-Bowl selection Umenyiora had innate athleticism that assisted him on his way to a team high 13 sacks. And Tuck racked up 10 sacks of his own in a myriad of ways.

The 2007 season revealed that Tuck was one of the better overall players in the league at the time. At 6-foot-5 and a listed 270 pounds, Tuck lined up all over the Giants defense. He was no stranger to the both the weak and strong side defensive end spots normally occupied by Strahan and Umenyiora respectively. But his play at the 3-technique (defensive tackle in a 4-3 alignment) is really what revealed the type of player Tuck was.

Playing on the interior line takes a different type of individual. Usually playing on the edges attains players a lot of glory due to instant gratification of a quarterback sack, but playing in the interior sometimes calls for a rarely used term in sports....Unselfishness!

Tuck would often take on blockers as a means of freeing up the two aforementioned ends, or even blitzing linebackers for splash plays. Being as though Tuck was at least 20 pounds underweight to meet the normal expectations of the position, makes it that much more distinctive. Interior line play is usually a combination of intelligence, strength, and more strength -- attributes that Justin Tuck possesses and then some. But you also have to have a lot of heart to battle in such close proximity with the offensive line. I don't think interior line play gets enough attention, and it's time that it does.

Over the next five seasons, which produced another Super Bowl, Tuck became the defensive leader and captain. Tuck's ability to communicate paired with his larger than life presence -- had as much to do with that as his on-field play. Retrospectively, Tuck's unselfishness and dominant play really embodied what mercurial head coach Tom Coughlin needed in a team leader. He was truly one of the stars of the league. Didn't hurt that he played in the media capital of the world.

Fast forward to present day. After totaling 39.5 sacks (9.8 average per season) from 2007-2010, Tuck has fueled the critics fire by coming up with a putrid nine the past two seasons. There are a ton of valid reasons for that lack of production.

First and foremost, injuries. (Although in my opinion after awhile injuries can become an excuse) Tuck has battled shoulder issues, as well as other injuries, over the past two seasons. For a specimen built to play with uncanny power and surprising agility, having those types of injuries has to retard any type of explosiveness generated from his lower body, as well as the ability to be violent with his hands while engaging lineman. And it doesn't help that he still played a great deal of the time in the interior of the line. To the naked eye he seemed to disappear some games. But on film he seemed to be affecting the game in a multitude of ways.

Here we have Tuck innocuously affecting a play from the 3-technique (Outside the guards shoulder) defensive tackle. It's tougher to get sacks from a 3 technique due to the lack of spacing. But affecting a play entails more than just getting a sack in the grand scheme of things.

Right away Tuck beats the guard with a finesse 'swim move' showing the versatility in his game. Notice the down and distance, the Browns would love to take a shot downfield to eat up the amount of yards to the first. But Tuck is on his way and the QB (Weeden) has yet to finish his drop.

The pressure Tuck provides on this play forces a quick checkdown that goes for only a couple of yards, forcing yet another long down and distance. This gives the Giants another chance at disrupting the QB -- which could keep them in this favorable position on the field. It also could create a turnover which would lead to easy points for the Giants offense. Sacks aren't everything.

In one of the most impressive things I've seen on tape all year, coach Fewell used Tuck as a linebacker in certain nickel and dime packages. I saw Tuck up close after a game last season. He looked to be carrying more weight than usual. He actually looked to be closer to 280 pounds than his listed 268. Imagine a guy that big having to play out in space.

His zone drops looked very smooth as he focuses on Eagles QB Michael Vick's eyes. He actually looked very comfortable in this position as a middle linebacker. Obviously this would affect his disrupting the QB -- as it's not his assignment. This is a clear throwing down, and one of your better pass rushers is playing out in space as a MLB. You have to wonder if the critics take this kind of stuff into consideration.

It was widely noted that Tuck was dealing with injuries. Look at the type of torque playing this position puts on his lower extremities. But you'd never hear Tuck complain about something like this. He'll gladly take one for the team.

On this play he gave one to the other team as he makes the play in space. Let's have a look at another one.

This time Tuck is playing an outside linebacker spot. He is shadowing the slot receiver who is in motion. Imagine what this does to the offense from a mental standpoint. You have your starting defensive end covering a slot receiver. This is way confusing. Coach Fewell needs some props for his somewhat schematic diversity.

You can actually see Saints QB Drew Brees looking in that direction with a bit of bewilderment.

Tuck does a veteran thing here by trying to affect the receiver going upfield before covering his zone. This helps out the secondary as it slows down the receiver a bit. He still has his eye on his regular assignment as well.

He passes off his assignment -- and turns to assess his zone responsibilities. As we can see here Saints running back Darren Sproles (43) is coming across the formation.

Tuck tackles one of the tougher players to tackle in space, in what will merely go down on the stats sheet as a tackle. The epitome of unselfishness.

For fans of the sack I can totally see the gripe Tuck produces. Getting four sacks in a season is a really poor statistic. But given the plethora of ways Tuck is deployed it can certainly be understood. In the interest of fairness, I never thought of Tuck as a big-time sack specialist, anyway. I always thought of him as more of a complete football player. Some of these linemen grab a bunch of sacks, but can't affect the game in any other way. They almost become a liability when the task is not getting to the QB.

The most sacks Justin Tuck ever had was 12. Even in a down season mentally and physically like last one, one would easily come to the conclusion that Tuck could've ripped off at least 10 sacks if he only played defensive end similar to Jason Pierre-Paul or Osi Umenyiora. Taking him off the line, or playing him inside has a negative effect on him reaching the QB. But it has a positive effect on the team, as your star is setting a very concrete example of what it's like to be a leader of a team. And for that he should garner a ton of respect from the media and fans alike. The film revealed a player that was hobbled with injuries, coupled with the pressure of being the captain of the defending champions. I thoroughly have confidence that Tuck will be an even better version of himself if he can avoid the injury bug. He's nowhere near washed up, and benching him would be like benching three players.

And besides, would you bench or cut a player who has the ability to do this?

Here we see vintage Tuck on the outside giving Steelers offensive tackle Mike Adams all he could handle. He sets him up with an outside moves then converts speed into power on his way to sacking Ben Roethlisberger.

Here's Tuck using a more patented path to the QB. He simply bull-rushes Redskins tackle Tyler Polumbus into the lap of Redskins QB Robert Griffin and sacks him in the process. Outstanding!

The Dark Knight will rise again!! 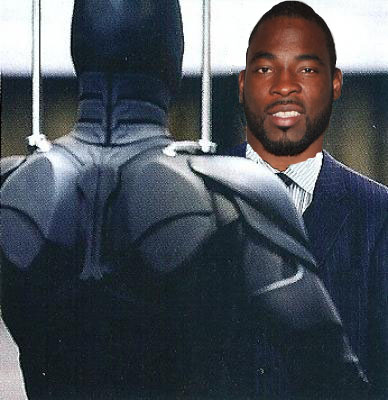