Chris Mortensen reported Monday that the Giants and the wide receiver appear on track for a contract agreement prior to the opening of training camp.

Chris Mortensen of ESPN was all over the Victor Cruz story on Monday. First, Mortensen told 'NFL Live' that there was "a 100 percent degree of certainty" that the wide receiver would have a new contract before the Giants open training camp on July 26. Next, Mortensen wrote that "parameters are in place" and "no obstacles are expected" to stop Cruz and the Giants from reaching a long-term deal.

Mortensen's 'report' really doesn't seem like much of a report at all. It's more of the same regarding what Mortensen said last week about Cruz and the Giants when he said he would be "shocked" if a deal was not reached prior to training camp.

No news or not, it seems that all signs are pointing in the right direction for Cruz to be present when the Giants report to the Timex Performance Center on the 26th, a date the NFL officially announced today for the opening of Giants training camp.

During an appearance at Story in Manhattan on Monday to promote the Gillette Fusion ProGlide razor defensive end Justin Tuck talked about how players can address the NFL's image issues.

"I think you always worry about the image of the NFL," he said. "But the only way I can control that is the things that I do. I can’t control what other people do.

"I can only control what image is Justin Tuck and the New York Giants. And I think we do a good job of upholding the standards of the NFL."

Here is a photo of Tuck getting a close shave: 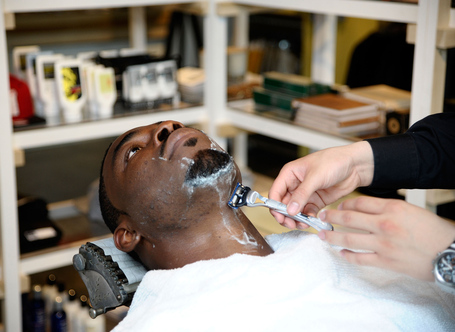 Justin Tuck gets a smooth shave from Gillette STORY in Manhattan on Monday.

Giants.com and Inside Football have both taken recent looks at new Giants tight end Brandon Myers. Here are the links to those:

NESN apparently thinks it would be a good idea for the New England Patriots to sign former Giants tight end Travis Beckum to replace Aaron Hernandez. John Schmeelk of Giants.com tweeted Monday that "apparently they didn't watch beckum play since Wisconsin." I have to agree.