Cooper Taylor is next on the list as we continue breaking down the New York Giants' 90-man roster.

Cooper Taylor overcame a serious heart condition that required surgery to wind up being selected in the fifth round of the 2013 NFL Draft by the New York Giants.

"We think we got a hidden gem there," said Giants Director of College Scouting Marc Ross. "This guy is big, fast, smart, plays the game the right way. He does a lot of things for Richmond. They line him up at multiple positions. You’ll see him in the box; you’ll see him back deep. He covers the slot. Productive there. He transferred from Georgia Tech, but we think this guy has got a lot of upside. Sent our (secondary-safeties) coach (David) Merritt down there to work him out -- a private workout -- and he was really impressed by him. We had him in for a visit. The kid is really smart. Loves football, so we think he has a ton of upside."

Let's take a closer look at Taylor, who has extraordinary size at 6-foot-4 3/4, 228 pounds -- as we continue our player-by-player breakdown of the Giants' 90-man training camp roster.

Taylor a New Breed of Safety? 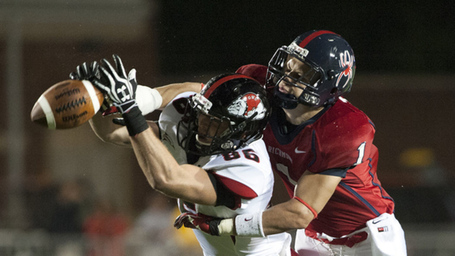 Taylor has the physical skills to playa traditional safety role and the size to function as a third linebacker in passing situations.

Taylor was an FCS All-American while playing for the University of Richmond last season.

When he was drafted much was made of the possibility that Taylor could play the hybrid linebacker/safety role or third safety for the Giants. Taylor is behind Antrel Rolle, Stevie Brown, Ryan Mundy and Will Hill on the depth chart, and entering camp seems likely to be fighting Tyler Sash for a roster spot. It seems most likely that his primary impact, should he make the team, will come on special teams during 2013.