For the Giants offense to take the next step, the explosive passing attack needs to be dangerous in all quadrants of the field. Check into another sessions of Uptown's film school to find out why Rueben Randle will take Kevin Gilbride's offensive scheme to the next level!

The consensus best receiving duo in the NFL is widely considered to be the Atlanta Falcons tandem of Roddy White and Julio Jones. A strong case can be made for the New York Giants pair of Hakeem Nicks and Victor Cruz -- among others. The title of best trio of receivers moves in a totally different direction. Demaryius Thomas, Eric Decker, and Wes Welker of the Denver Broncos are the best on paper. But I believe with the emergence of future star Rueben Randle, the Giants could at the very least match the Broncos output, if not surpass it. The 2013 season will be a telling year for the Giants well-rounded pass receiver.

As 1-2 punches go, Nicks and Cruz possess most attributes that a high-powered NFL attack would want. In Cruz's case you have a phenomenal route runner equally adept at playing inside of the formation as well as on the outside. A blend of quickness, agility, and speed -- Cruz can threaten defenses down-field, while delivering key first downs in the process. 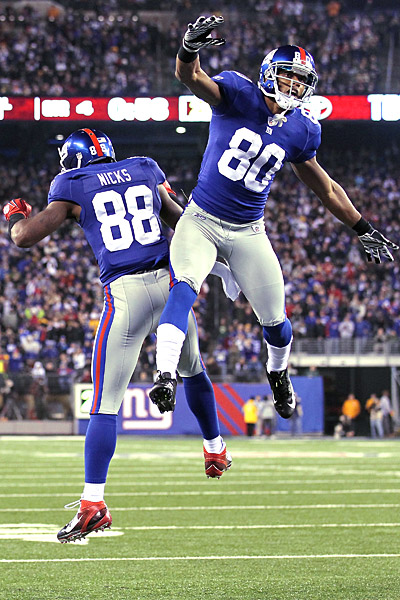 Nicks is a certified bully! The physicality with which he plays may be only superseded by his spectacular ball skills. He has a nice 'get off' move reminiscent of the crossover dribble in basketball and he uses it in a multitude of ways. He's virtually unstoppable in the intermediate game, but can be a terror in the deep game as well. He's just a well-rounded, underrated, star in the making. So far his biggest opposition has been his health. But when healthy he is the proverbial straw that stirs the drink for Gilbride's vertical passing scheme.

In the intricacies of Gilbride's high-risk, high-reward offensive scheme all eligible receivers must be able to threaten to back-half of the defense to back off defenders from concentrating on the Giants annually potent running game. The name of the game for Gilbride is a heavy and physical run game, with physical outside receivers that can also take the top off the defense. That description fits Rueben Randle with perfection!

Randle comes from one of the most successful college programs of the past decade in LSU. The program really started to catch fire circa 2004, under head coach Nick Saban who led the team to a national title in that season. His penchant for big receivers helped former NFL rookie of the year Michael Clayton tear up college defenses, and landed Kansas City Chiefs star Dwayne Bowe on the roster. Subsequent coach Les Miles continued the tradition all the way to present beginning with Brandon Lafell (Panthers), then following up with NFL receivers Terrance Toliver (Bears), Demetrius Byrd (former Charger), and Randle. 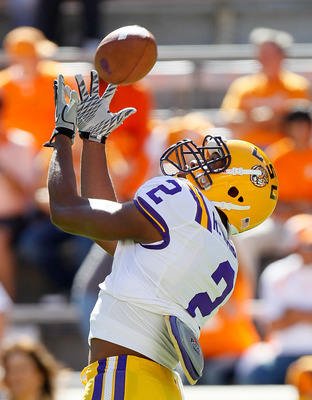 With Bowe at 6-foot-2, 220pounds and Randle at 6-2, 210 the two could almost be considered twin-like in a myriad of ways for the 'Purple and Gold' of the LSU Tigers. Both Bowe and Randle are very similar in skill-sets as far as their intermediate game acumen, as well as the ability to stretch the field despite having average timed 40 speed. Both are difficult to be tackle due to their physical nature of play, and both appear even taller and bigger than their listed height and weight. With multiple 1,000-yard seasons to Bowe's credit, Giants fans should hope the similarities between the two continue well into the pros.

I've always felt that Randle would be one of those players who would have a significantly better career in the pros than at the collegiate level. The level of quarterback play at LSU during his tenure was deplorable. Despite catching passes from below average signal-callers, Randle managed 53 catches for 917 yards, with 8 TDs in his final season as a junior. His 17.3 yards per reception is the eye-popping statistic that I think many scouts and observers overlooked in gauging his draft status. His 4.5 in the 40 yard dash at the NFL's scouting combine only seemed to further the notion that Randle might not have the prerequisite speed it takes to succeed at the next level. Well that my friends is preposterous! 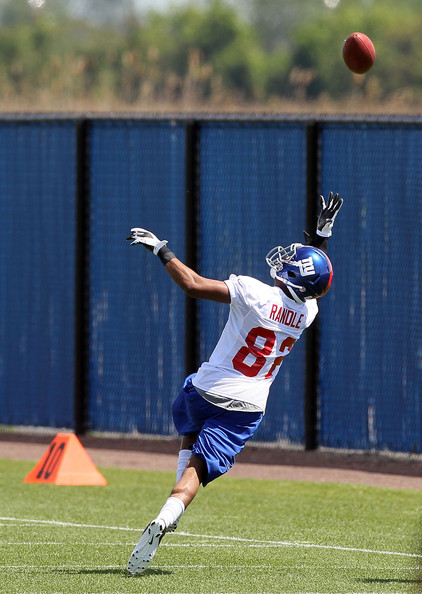 Bengals receiver A.J. Green is considered one of the best overall receivers in the NFL in just two seasons. Despite running a 4.5 at the combine, he continues to dazzle with his ability to stretch the field on a weekly basis. Conversely, Atlanta's Jones was never considered a serious big-play threat in college (by most), yet ran a 4.39 at the combine -- which proves to be accurate as he might be the best big-play receiver in the game. Both of these stars weren't the type of down-field threat that Randle was in college - as all three were in the same conference at the same time. The difference arose from Jones and Green being two of the highest touted receivers coming out of high school in recent memory. Once Randle finally got the opportunity to showcase his skills, he had as fine of a season as either had, while proving to be the more explosive threat out of the three. I believe with the type of QB the Giants possess, paired with the type offensive scheme Randle is playing in, he can make a name for himself in similar fashion in the NFL.

And last year was a sneak peek into that theory...

Randle's first-year productivity of 19 catches (32 targets), 298 yards, and 3 TD's won't move mountains -- but viewed in context with the amount of depth at his position, coupled with complex nature of the Giant's offensive scheme, and most would see the value of Randle especially as his career is projected forwards. Let's take a look at the film to further illustrate. Here we have Randle running a skinny post against former Ravens corner Cary Williams who's very versed in man coverage. Cary Williams is one of the more taller and physical corners in the league. What I noticed most about Randle is his very sufficient set-up move. In a long-developing route like this one, he doesn't tip his hand - and makes sure each route mirrors each other at the beginning. When you're a physical receiver like Randle, being efficient in your technique makes you that much more difficult to cover. As you can see, Randle's deep speed is deceptive, as he can be a bit of a long strider. Once a route gets past 25-30 yards expect Randle to beat most corners. It's the Usain Bolt factor. Bolt isn't the quickest sprinter out of the gates to his height. But as the race develops, his longer legs have less turnover, therefore leveling out the maximum effort it takes for him to get it fully going. Randle is no different in as far as football speed. This is where his physicality will be hard to be replicated by most corners. The ferocity with which Randle attacks a pass in uncanny. He usually looks like former New York Knicks forward Larry Johnson going up for a rebound in 50/50 ball situations. Look at how he boxes Williams out, essentially shielding him from the pass. Randle does a great job high-pointing this under-thrown pass. Look at how high he gets off the ground, and how far away from his body he catches it. This is almost indefensible for the smaller corners of the NFL. Randle plays this perfectly from beginning to end.

Randle's set up move has to be a combination of great coaching and the fact that he gets to watch Hakeem Nicks operate up close in practice weekly. Nicks is very similar to Randle in his physicality, and his set up move is one of the most unique in the NFL. He truly is one of the more well-rounded receivers in the NFL. People have often speculated that Randle's development could eventually make Nicks expendable. Hopefully the Giants brass find a way to keep Nicks and Randle together for years to come. Unfortunately, in a business where teams are looking to do everything as inexpensive as possible, I can most certainly see this being the case. A sad and unfortunate part of the NFL. That's why it may be imperative for Randle to expedite his production to take care advantage of what I think could be the best trio in football. Here Randle is being defended by Cowboys corner Brandon Carr. Carr is an excellent man defender because of his length at 6-feet. Randle shows why being close to 6-foot-3 and being able to jump out of the stadium is a tough combo to defend. Randle gets into his 'shimmy' move, which immediately gets Carr off balance. Randle is running short fade to the sideline - so he must leave enough room for the back shoulder throw. When it's 50/50 jump ball time, Randle is at his best. Once again he boxes the defender out who's trying to use his hands as leverage. Randle will hand battle all day in part because of his physical nature. As much as I admire Randle's deep-ball prowess, he's a force to be reckoned with in the short to intermediate game as well. Beautiful! Outjumps one of the better leapers at corner and high-points the ball -- effectively shielding the catch away from the defender! This takes a lot of skill and concentration. Randle also has the wherewithal to to get an extra four yards on the play resulting in a first down. Big, physical, speedy, and heady. What's not to like about this 22-year-old? What I like about Randle on quick routes like this slant, is his ability to stay patient. A lot of players rush these routes and allow the defender to guess and beat them to the play. Similar to Nicks he uses the crossover dribble in the football sense to set up his opponents. Upon film study, I notice how often this gets corners off balance. It's usually followed by another move. The great Stephon Marbury would be proud of setups like this! Crossover and then hit him with the jab step. That's indefensible in my book! Randle is almost to the top of his route and the defender is still in his pedal, trying to recover from getting his ankle broke with the crossover. Watch how quickly Randle witches from finesse to power! Goes up in traffic and tucks the ball before the linebacker can deliver a big hit. Note how Randle has his body in between the ball and the tackler. You have to give your quarterback a full target to help him out sometimes. Sorta like a catcher in baseball.

Over the course of time Randle will develop into a No. 1 receiver. For now he just has to be dangerous enough to pull attention away from Nicks and Cruz. I believe the development of Randle will take a major step in the positive direction in 2013. It's very plausible that by the end of the year he could be looked at as an equal rather than an understudy. He has elements to his game reminiscent of both Cruz and Nicks. 2012 was a small yet illustrative sample of what Randle is made of. Adding a smart receiver, with innate ball skills who can get deep and get open will go a long way towards making the Giants three receiver sets the most potent in the NFL. Help is on the way from Randle.